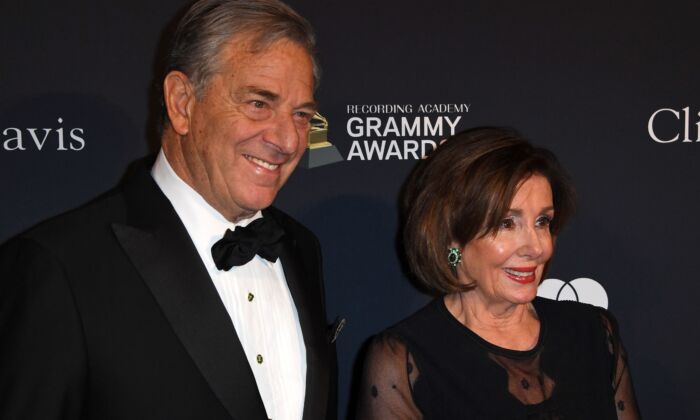 Speaker of the U.S. House of Representatives Nancy Pelosi (D-Calif.)(R) and Paul Pelosi arrive for the Recording Academy and Clive Davis pre-Grammy gala at the Beverly Hilton hotel in Beverly Hills, Calif., on Jan. 25, 2020. (Mark Ralston/AFP via Getty Images)
US News

House Speaker Nancy Pelosi’s (D-Calif.) husband, Paul Pelosi, was allegedly unsteady on his feet and slurring his words after a car crash in California in May, according to a new court document.

Pelosi, 82, allegedly showed “signs of impairment” during a field sobriety test when he was involved in a car crash in Napa County on May 25, according to court documents published by Fox News.

“His eyes appeared red/watery, he was unsteady on his feet, his speech was slurred, and he had a strong odor of an alcohol beverage emanating from his breath,” according to the complaint.

The court document was published a day before Pelosi pleaded not guilty to two DUI charges. The millionaire didn’t attend the arraignment and was represented by his lawyer, Amanda Bevins, according to reporters on the scene.

His arraignment also comes after Speaker Pelosi visited Taiwan amid bombastic threats from the Chinese Communist Party (CCP)—the first time a House speaker has done so since 1997.

When responding officers arrived at the scene on the night of the crash, they found Pelosi sitting in the driver’s seat, according to the document, adding that Pelosi was the only one in his Porsche.

“Pelosi handed officers his driver’s license and an ‘11-99 Foundation’ card when asked for identification,” the document alleged. The 11-99 Foundation was a charity to provide assistance to CHP members and scholarships to their children.

At that time, the other driver, identified as John Doe, was standing outside his vehicle, it said.

Medical units also arrived, but both Pelosi and Doe refused treatment. However, Doe reported to prosecutors on June 2 that he had pain in his upper right arm, right shoulder, and neck, according to the complaint. Doe alleged that he felt it difficult to lift things with his right arm and suffered “headaches that had been present prior to the collision.”

Both vehicles “sustained major collision damage” after the incident near the intersection of California Route 29 and Oakville Cross Road, according to the document.

Pelosi was later transported to a CHP office in Napa where his blood sample was obtained at 12:32 a.m, the document said. The sample was determined to have an alcohol content of 0.082 percent, which is over the legal limit in California.

Pelosi was arrested for allegedly driving under the influence of alcohol on May 29. Napa County records show he was released about three hours later. The records indicate that his bail was set at $5,000.

In a separate two-charge criminal complaint published by Fox News, Pelosi allegedly crashed his car “under the influence of an alcoholic beverage and a drug and under their combined influence.”

Bevins told The Epoch Times that “I believe that the drug reference is part of the statutory boilerplate language in the complaint.”

A spokesperson for Speaker Pelosi’s office previously declined to comment on the matter while saying that the congresswoman was attending an event in Rhode Island at that time.

She arrived in Korea from Taiwan on Wednesday night.