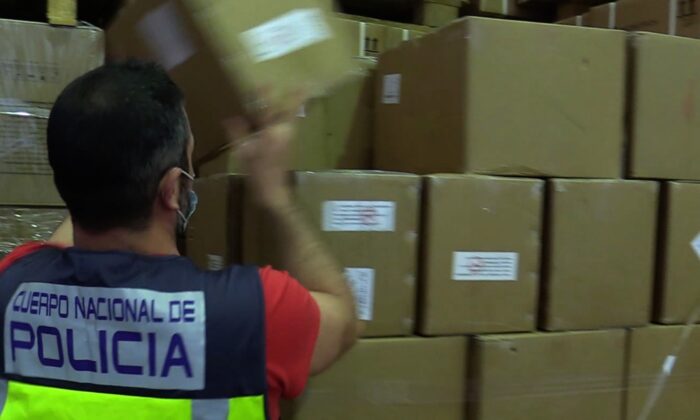 As reported by the national police, an investigation started on Dec. 28 after agents learned about the possible distribution of antigen tests that did not comply with specific protocols set by the Spanish Ministry of Health.

In less than 24 hours, agents managed to locate and block the distribution of the merchandise, Spanish police said in a Dec. 30 statement. The merchandise was found in a well-known industrial estate in the municipality of Fuenlabrada, a suburb in southern Madrid.

“Agents carried out an investigation in order to inspect these products corresponding to four companies located in five warehouses,” the department wrote in the statement.

“In total, around a million tests were analyzed, of which about 300,000 were intervened due to deficiencies in the documentary procedures or because they lacked authorization for distribution,” it explained.

Authorities did not immediately name the companies, though they did say administrative files were opened to look into whether the companies could have committed a criminal act.

The police acted to ensure “the tests don’t give false information” to users trying to find out if they are positive for COVID-19, the national police press office for Madrid told CNN.

Enrique Ruiz Escudero, a Spanish politician who serves as Madrid’s minister of health, congratulated the actions of the agents, stating that it is “good news,” and recalled that false items have been seized previously when there was a high demand for masks or antibody tests, Elo Mundo reported.

The move also comes amid shortages of home-use antigen tests as CCP virus cases are on the rise again in Spain—reportedly spurred by the Omicron variant of the CCP (Chinese Communist Party) virus, which causes the disease COVID-19.

Spanish Health Minister Carolina Darias said on Wednesday that in order to increase supply and meet demands, the government has authorized six companies that make professional-use antigen tests to send them to pharmacies—for sale to the public.