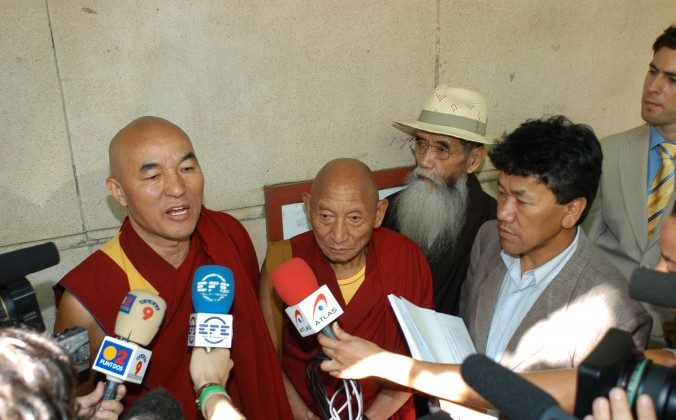 After months of delay, a judge in Spain’s highest court issued arrest warrants for five former high-ranking Chinese regime officials, including former Chinese Communist Party leader Jiang Zemin, and ordered the warrants be sent to Interpol. The warrants may not stand for long, if the People’s Republic of China has its way.

On Nov. 18, 2013 the National Court had ordered the issuing of the warrants for genocide, torture, and crimes against humanity alleged to have been committed during China’s occupation of Tibet. In a related lawsuit, on Oct. 9, 2013 the court indicted former Chinese Communist Party head Hu Jintao for genocide in Tibet.

The ruling in November generated loud complaints by the diplomats of the People’s Republic of China. On Tuesday, in response to the issuing of the warrants, the PRC’s ambassador in Madrid filed a “strongly worded protest” with the Spanish government, according to the newspaper El Pais.

At the Chinese Foreign Ministry’s daily briefing on Tuesday, spokeswoman Hua Chunying said, “China is extremely dissatisfied with and resolutely opposed to the wrong actions of the relevant Spanish [court] taken while ignoring China’s solemn position. Whether or not this issue can be appropriately dealt with is related to the healthy development of ties [between the two countries].”

According to the newspaper El Pais, Judge Ismael Moreno had procrastinated in issuing the warrants in part due to concerns for the “extreme discomfort” shown by China’s representatives. After intense discussions within the Court, the judge agreed to sign the warrants, guaranteeing the suit will go forward, at least for now.

The ruling Popular Party introduced a measure in Parliament on Tuesday that would prevent the courts from going forward with this lawsuit, and other human rights lawsuits dependent on the expansive interpretation of universal jurisdiction currently enshrined in Spanish law.

Universal jurisdiction is a principle of international law according to which a nation may try individuals for offenses if they are sufficiently grave, no matter where the offenses may have occurred.

All of the opposition parties have announced they will vote against the new measure, but even their unified opposition is not sufficient to stop it from becoming law, if the Popular Party decides to push it through.

In addition to former regime head Jiang Zemin, the warrant also included Li Peng, the former premier, known as the “butcher of Beijing” for his role in the massacre of students on Tiananmen Square in 1989. Li was implicated because he was the premier during violent crackdowns in Tibet in the 1980s and 1990s.

Other officials included Qiao Shi, the former security chief and head of the Chinese People’s Armed Police during the period of martial law in Tibet in the late 1980s, Chen Kuiyuan, Party Secretary of Tibet from 1992-2001, known as a hardliner, and Peng Peilun, the minister of Family Planning in the 1990s.

When Spain’s National Court indicted Hu Jintao for genocide, Alan Cantos, the director of the Tibet Support Committee, told Epoch Times the court’s decision was “a triumph of Spanish justice that has fallen on the side of truth, principles, and law, and not on the side of diplomatic pressures and powers in China.”