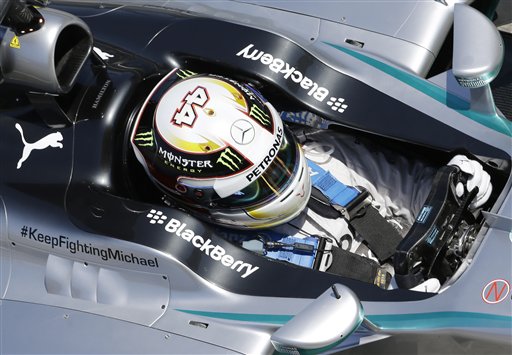 Mercedes driver Lewis Hamilton of Britain steers his car during the second free practice at the Barcelona Catalunya racetrack in Montmelo, near Barcelona, Spain, Friday, May 9, 2014. Lewis Hamilton finished Friday's opening day of practice at the Spanish Grand Prix with the top times from both training sessions. The British driver is looking to add to his three poles positions and hat trick of wins after four races this season. The Formula One race will be held on Sunday. (AP Photo/Luca Bruno)
Sports

The Spanish Grand Prix is set for May 10.

The race will start at approximately 2 p.m. CEST. on Sunday.

Qualifying will continue at the same time on Saturday.

Both will be broadcast (some broadcasters will show only the race) on BBC and Sky Sports in the United Kingdom, NBCSN in the United States, Channel Ten or Channel One in Australia, Sky Sport in New Zealand, and Fox Sports in Mexico, Central, and South America.

One or both will also be shown on RTL in Ireland, on TSN in Canada, on OTE TV in Greece, on M1 in Hungary, Sky F1 in Italy, MTV Max in Finland, Polsat Sport in Poland, SLO 2 in Slovenia, Sport1 in The Netherlands, BBC in Belgium, RTL or Sky Deutschland in Germany, Nova in the Czech Republic, TV3+ in Denmark, SportTV in Portugal, Abu Dhabi Sports 2 in the United Arab Emirates, Star Sports 4 in India,

Live streaming is available on NBC in the United States, Tenplay.com in Australia, SKY in New Zealand, TELMEX in Mexico, Foxplay.com in Central and South America, Star Sports in India, Sporting Telenet in Belgium, Nova in the Czech Republic

Current Formula One Standings (Only Drivers with Points Listed)

MONTMELO, Spain (AP) — Sebastian Vettel’s practice session at the Spanish Grand Prixended with the four-time defending Formula One champion hitching a ride on a scooter after his Red Bull puttered out.

Lewis Hamilton had no such problems, finishing Friday’s opening day of practice with the top times from both training sessions as the dominating Mercedes team showed no signs of slowing down. The British driver is looking for his fourth straight win this season.

Mercedes teammate and F1 leader Nico Rosberg was right behind, setting the afternoon’s second best time after his crew fixed a cooling issue.

Vettel was running through his fifth lap on the sunny and dry 4.6-kilometer (2.9-mile) Circuito de Barcelona-Catalunya when his Red Bull came to a halt. He then helped push his RB10 out of the path of his rivals before a group of fans gathered at the fence to take photographs of the champion using a fire extinguisher on the rear of his malfunctioning car.

After Vettel was whisked back to the paddock on the back of a scooter, Hamilton clocked the fastest lap time in the opening session and then bettered that by almost 1.5 seconds in the afternoon with a mark of 1 minute, 25.524 seconds.

Red Bull said an electrical problem that “damaged the wiring” of Vettel’s car meant he couldn’t return for the afternoon practice session. That left Vettel with only one session on Saturday before qualifying.

“It’s a small failure, but a big consequence,” Vettel said.

Red Bull had given Vettel’s car an older chassis in a move the German called a “sanity check” to try to find an elusive answer to his car’s lack of pace.

The Austrian team renowned for its design had a bigger problem than speed, however, when Vettel was left stranded just after the fifth turn.

Vettel is having his worst season at Red Bull after a massive rule book overhaul with only one podium finish so far and sits in a distant fifth place in the standings. He has even had to let new teammate Daniel Ricciardo pass him twice during the last two races.

And Ricciardo emerged from the opening day of practice as the closest thing the grid can offer as a threat to the Mercedes duo by recording the third best time in both sessions at almost a second behind Hamilton.

Hamilton trails Rosberg by four points despite having won the last three races in front of his teammate. The pair have won all four races and taken all four pole positions this year.

Hamilton hasn’t lost a step after a three-week break and showed that the other teams have yet to make headway despite their upgrades for the start of the season’s run of European events.

“It’s been a great day today and I’m happy to be back in the car after what feels like quite a long break,” said Hamilton. “Our two practice sessions today went very smoothly, in fact I’ve not had such a good Friday for a very long time.”

Last year’s race winner, Fernando Alonso, had the fourth best effort in both sessions, while Ferrari teammate Kimi Raikkonen could do no better than fifth in the afternoon.

Ferrari chairman Luca di Montezemolo said he was “not happy” with his team and that he would work closely with new team principal Marco Mattiacci to “improve the situation as soon as possible.”

Pablo Maldonado of Lotus recorded the most laps through both 90-minute sessions with a total of 76.

The early session to prepare for Sunday’s race featured some close calls.

Sergio Perez had to box when the left mirror on his Force India car became detached. The Mexican driver had to grab it and drive one-handed while coming in. Sauber test driver Giedo Van der Garde survived a bigger scare when he told his team he had “a break failure” and ran off course, barely missing the wall.

In the second session, Jean-Eric Vergne of Toro Rosso was given a 10-place grid penalty after his car’s right rear wheel flew off. Race stewards ruled his team has breached safety regulations and gave it a 30,000 euro ($41,000) fine.

Max Chilton had an error-plagued afternoon, twice coming in due to engine trouble before a piece of his Marussia went flying on his next trip out. He ended the day by driving into the sand.