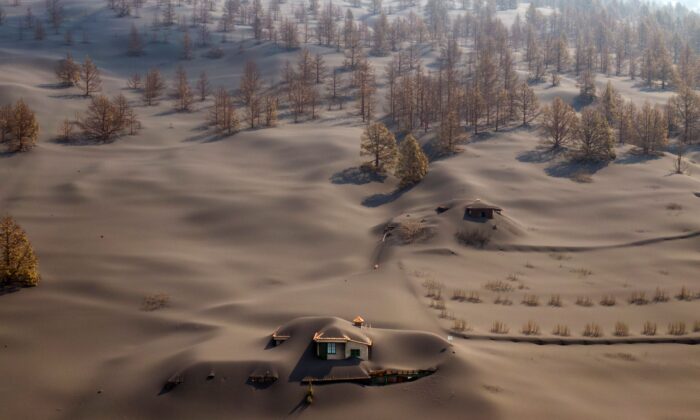 A house is covered by ash from a volcano that continues to erupt on La Palma in Spain's Canary Islands, on Oct. 30, 2021. (Emilio Morenatti/AP Photo)
Europe

But the emergency in La Palma, the most northwest island in the Atlantic Ocean archipelago, is not over due to the widespread damage the eruption caused, the director of the Canaries’ volcanic emergency committee said in announcing the much-anticipated milestone.

“It’s not joy or satisfaction—how we can define what we feel? It’s an emotional relief. And hope,” Pevolca director Julio Pérez said. “Because now, we can apply ourselves and focus completely on the reconstruction work.”

Fiery molten rock flowing down toward the sea destroyed around 3,000 buildings, entombed banana plantations, and vineyards, ruined irrigation systems, and cut off roads. But no injuries or deaths were directly linked to the eruption.

Pérez, who is also the region’s minister of public administration, justice, and security, said the archipelago’s government valued the loss of buildings and infrastructure at more than 900 million euros ($1 billion).

Volcanologists said they needed to certify that three key variables—gas, lava, and tremors—had subsided in the Cumbre Vieja ridge for 10 days in order to declare the volcano’s apparent exhaustion. Since the eruption started on Sept. 19, previous periods of reduced activity were followed by reignitions.

On the eve of Dec. 14, the volcano fell silent after flaring for 85 days and 8 hours, making it La Palma’s longest eruption on record.

“We will continue working together, all institutions, to relaunch the marvelous island of La Palma and repair the damage,” he said on Twitter.

Farming and tourism are the main industries on the Canary Islands, a popular destination for many European vacationers due to their mild climate.