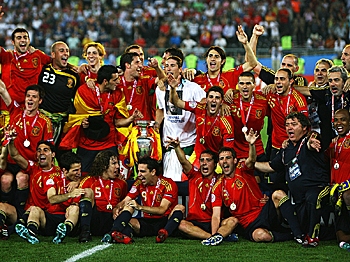 SPAIN EURO 2008: Spain shook off their choker label and became one of the strongest soccer nations in the world with their Euro 2008 triumph. The Spaniards enter South Africa as one of the favorites. (Shaun Botterill/Getty Images)
Soccer

By James Poulter
Print
Be afraid, be very afraid.

Spain is the first team ever to qualify for the World Cup finals having won all of their 10 qualifying matches.

In terms of outright victories, the last decade has seen a sustained consistency unparalleled even by the great Italian team of the 1930s. Spain is now generally considered to be better than the team that triumphed at Euro 2008.

A midfield lineup including Alonso, Xavi, Iniesta, and Silva is considered so good that Arsenal’s Cesc Fabregas, arguably the Premier League’s most accomplished midfielder, isn’t guaranteed a starting place.

The greatest strength of this team is their mastery of the ball. By maintaining possession with such fluency and verve, they exhaust the opposition. After outclassing France in a recent friendly in Paris, Thierry Henry exclaimed, “You can’t get the ball off them!” Spain have discovered their national style.

It is a well known fact that Spain has not been past the quarterfinals of a World Cup since 1950. Could the weight of this legacy be their undoing? Brazil’s Daniel Alves certainly hopes so, “Brazil have something Spain haven’t: we’ve won it five times, Spain have never,” he told Four Four Two magazine.

Alternatively, this lackluster history may well be a blessing for Spain, helping to guard against the complacency which can ruin outstanding teams.

One to watch is Gerard Pique. Still only 23, he has already won it all with Barcelona, and a good World Cup may see him take the mantle of best defender in the world.

Consider also the dynamic and explosive forward line of Fernando Torres and David Villa. Perhaps this is why other competing nations have been reduced to hoping for injuries…

The latest news from the Liverpool camp is that Torres should be fit to play in the tournament, even if he doesn’t make the opening game. More worrying for Spain is the condition of Xavi.

Spain’s best player in their Euro 2008 victory is playing out the La Liga season with a muscle injury that even his Barcelona manager admits may derail his World Cup dreams.

Other than this, with quality throughout the squad, a hugely successful build up losing just once in 44 games, and a finely tuned well established style, rivals are left clutching at straws.

There is a perceived weakness at right back, with neither Ramos or Capdevila quite attaining the heights of the rest of the team, but of course to exploit this you first have to get the ball.