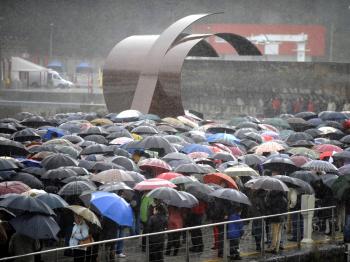 Families and friends of the crew of a Spanish tuna trawler Alakrana being held by Somali pirates demonstrate on November 7, 2009, in the harvour of the Basque town of Bermeo. (Josune Mtz. De Albeniz/AFP/Getty Images)
International

The vessel and its 36 crew members were abducted on Oct. 3 off the Somalia coast. Somali pirates demanded a $4 million ransom on Oct. 14 plus the release of two pirates captured by the Spanish Navy on Oct. 4.

The situation turned extremely tense after three Spanish crew members were taken by the pirates to an unknown destination on land, earlier this week. To the desperate families’ relief, they were taken back to the vessel on Friday.

The families of the fishermen and thousands of supporters took to the streets on Saturday in several parts of Spain demanding concrete action from the government. They asked the Spanish authorities to negotiate the extradition of the prisoners to Somalia.

Representatives of the crew members' families will hold a meeting with National Court president, Ángel Juanes, on Tuesday to ask for the extradition of the pirates to Somalia.

This comes about after the Spanish government made very clear, earlier this week, that sending the prisoners back to Africa is not an option.

Private security guards hired by a Basque tuna trawler, the Artza, managed to repel an attack by pirates on Oct.31.

Somlian pirates have hijacked 34 ships this year in the busy Gulf of Aden, an important shipping trade route off the coast of Somalia.