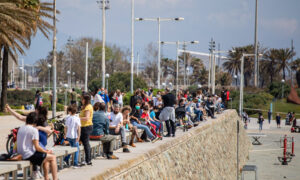 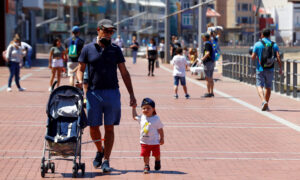 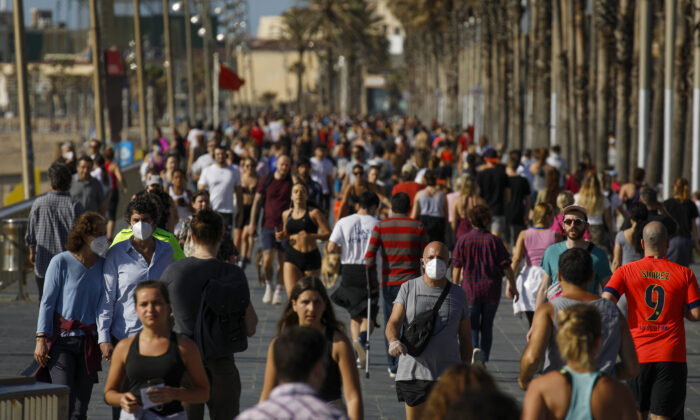 People exercise on a seafront promenade in Barcelona, Spain on May 2, 2020. Spaniards have filled the streets of the country to do exercise for the first time after seven weeks of confinement in their homes to fight the CCP virus pandemic. (Emilio Morenatti/AP photo)
WORLD

Spaniards Pour out for 1st Exercise in 7 Weeks of Lockdown

BARCELONA—Thousands of Spaniards woke up early on Saturday to lace up their running shoes for the first time in seven weeks after the government ended a prohibition on outdoor exercise.

At 6 a.m. early risers poured into the streets dressed in athletic gear to run, bike, and speed walk, with many taking extra caution to loosen up atrophied muscles and avoid a twisted ankle that would ruin the joy of release.

A few tried running with a face mask despite the difficulty it causes with breathing. The masks will be obligatory to wear on public transport starting Monday to reduce the chance of infection from the Chinese Communist Party (CCP) virus that causes COVID-19.

“I feel good, but tired. You sure notice that it has been a month and I am not in shape,” 36-year-old Cristina Palomeque said in Barcelona after taking a break following a 20-minute jog. She had grown tired of following Zumba and yoga classes online.

“Some people think it may be too early (to go out), as I do, but it is also important to do exercise for health reasons,” she said.

A brilliant sunny sky in Barcelona drew many to the maritime promenade to get as close as possible to the beach, which is still off-limits. People are supposed to respect a 2-meter distance, but the crowds in some spots made that impossible.

“We woke up very early so that we wouldn’t find it too full of people, but … it’s complicated,” 37-year-old Eduardo Conte said after a run along the Mediterranean beachfront. “I feel a rush (being back outside), but you have to take it easy so we don’t all end up with injuries.”

The scene was similar to that seen last weekend when Spain’s children were let out for a walk with a parent for the first time in six weeks. After some chastising by local officials in the worst cases, the population behaved better throughout the week.

The government has set up time slots for age groups and activities to prevent crowds from forming and exposing the most at-risk elders.

Towns and villages with fewer than 5,000 inhabitants are exempt from the timetable dividing people by age groups.

Since Spain’s lockdown started on March 14, only adults have only been able to leave home, and only for shopping for food, medicine and other essential goods, and to walk dogs close to home. For two weeks all commuting was banned; now only unavoidable commutes to and from work are allowed, with authorities encouraging people to work from home.

Spain has detailed a complex rollback plan that will vary by province that will take effect on Monday. Those with the fewest cases and with health care resources to handle a rebound of the virus will be the first to enjoy a further loosening of the measures.

The lockdown, among the strictest in the world, has succeeded in reducing daily increases of over 20% in cases to under 1% and saving Spain’s hospitals from collapse.

Spain has 25,100 confirmed deaths from the virus after a daily increase of 276 was reported on Saturday. That is down from daily death tolls of over 900 a month ago. Another 1,147 cases reported over the past 24 hours took the total of confirmed infections to 216,582.

The huge field hospital the military helped set up in a convention center in Madrid was closed on Friday. Madrid had already closed the makeshift morgue the army had established in an ice rink.

“These are very strong restrictions, but it is what it is. We have to follow the instructions from the Health Ministry because they know more than us,” 52-year-old Manuel Garcia said in the capital.

“This feeling of freedom is great. When this gets back to normal, all of us will feel even better.”