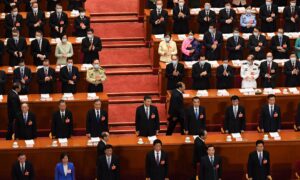 Spalding: the CCP’s Influence on 2020

Robert Spalding, a retired Air Force brigadier general and senior fellow at the Hudson Institute, said this “entire year has been dominated by actions of the Chinese Communist Party” because “2020 has really been about the coronavirus.”

He said that the Chinese Communist Party (CCP) enabled the spread of the virus through international air travel while blocking domestic air travel within China. He said the CCP locked down the distribution of PPM masks around the world, put pressure on the World Health Organization to not talk about human to human transmission, encouraged panic on social media, and spread disinformation that the virus originated from the United States and Spain.

“So when you add all of these things together, the actions by the Chinese Communist Party deliberately impacted the U.S. election,” he said.

He went on to say that the actions of CCP promoted a narrative that the U.S. wasn’t handling the pandemic well compared to China, “putting the blame” on President Donald Trump “rather than on the CCP who was responsible for spreading it to the United States.”

According to Spalding, the cultural, political, and academic landscape—with things like critical race theory and social justice programs—mirrors that of the oppressive communist regime in China.

Spalding said that the intelligence community and journalists may dispute the CCP’s impact on the world because there is no hard paper trail. But, he said, the CCP is one of the “most secretive organizations in the world” that would never “telegraph what they are doing” unless there is a “major crisis” in the country.

According to him, knowing how the CCP operates, the link between the regime and the state of the world in 2020 is very clear.