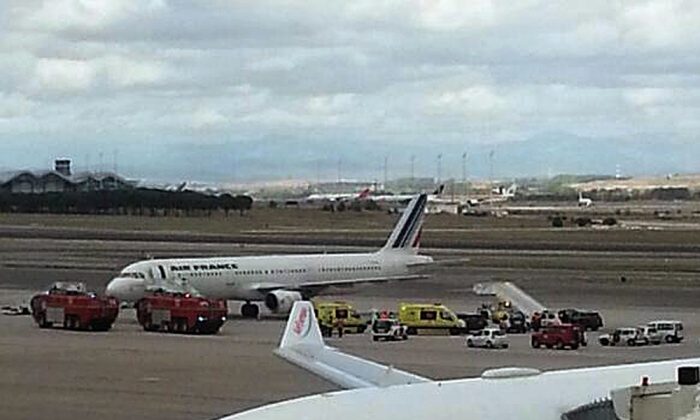 Emergency crews stand next to a plane, carrying 163 people, at the Madrid Airport, Spain, Thursday, Oct. 16, 2014. An Air France plane was isolated at Madrid's airport on Thursday because of a suspected Ebola case after a passenger was reported to have a fever and shivers, officials said. The passenger, who had traveled from Lagos, Nigeria, was taken by ambulance to an unspecified hospital in Madrid but the rest of the passengers were allowed to leave the plane as normal, Air France said in a statement. (AP Photo/Antoni Manchado)
Ebola

MADRID—Four people with fever considered at risk for Ebola were being tested Thursday in Spain for the virus, including one who arrived on an Air France jet that was isolated at Madrid’s airport as a precaution, officials said.

Other passengers were allowed to disembark. But a passenger with a fever who had traveled from Nigeria was taken by ambulance with a driver wearing protective gear to Madrid’s Carlos III hospital.

Another person with a fever who came into contact with infected Spanish nursing assistant Teresa Romero before she was hospitalized on Oct. 6 also was sent to the same hospital, the Health Ministry said. Romero’s condition, meanwhile, appeared to be improving, a ministry official said.

A missionary was transported to the hospital because he came down with a fever after returning to Spain from Liberia, where his order treats Ebola patients, Spain’s government said. Two Spanish priests with the same San Juan de Dios order died in Madrid in Aug. 12 and Sept. 25 after being repatriated from West Africa for treatment.

A fourth person hospitalized with fever Thursday for testing was a Red Cross health worker who recently worked with Ebola patients in Sierra Leone and returned home to Tenerife in the Canary Islands, officials said. Two roommates showing no symptoms were placed in hospital isolation as a precaution.

The Air France flight carrying 163 people was isolated after arriving from Paris in a remote part of Madrid’s airport for disinfection.

Meanwhile, Danish authorities tested a medical worker who had been in West Africa.

Sweden said it would give an additional 100 million kronor ($14 million) to support Ebola fighting efforts, on top of $140 million ($19 million) pledged previously.

In Geneva, a World Health Organization official said the Ebola death toll will rise to more than 4,500 this week from among 9,000 people infected.

From The Associated Press. AP writers Ciaran Giles in Madrid, Jan M. Olsen in Copenhagen, Denmark, and Karl Ritter in Stockholm, Sweden, contributed to this report.