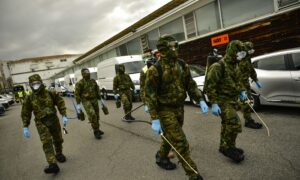 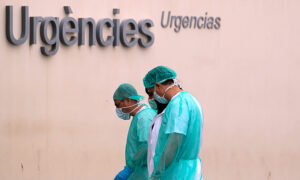 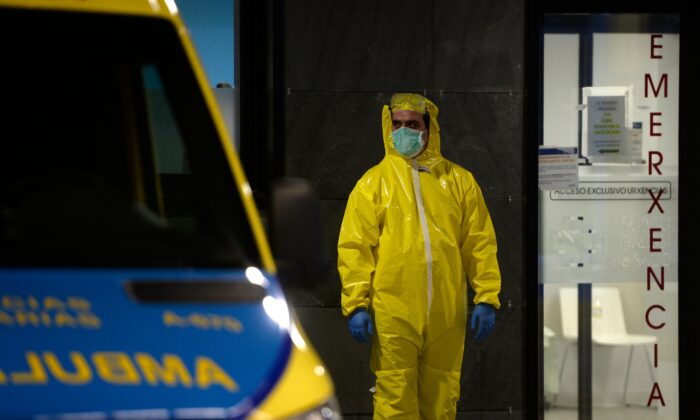 A paramedic stands outside the Alvaro Cunqueiro hospital in Vigo, northwestern Spain, on March 25, 2020. (Miguel Riopa/AFP via Getty Images)
Europe

Spain reported another surge in deaths from the CCP virus as the number of infections and recovered also rose significantly overnight.

Spanish authorities recorded 655 new deaths from the virus from China, which causes the disease COVID-19, bringing the death toll to 4,089.

Spain’s Ministry of Health also said that over 1,600 patients had recovered from the new illness in the last 24 hours. Over 7,000 people in the country have now been “cured,” according to the ministry.

There is no vaccine or proven treatment for the CCP virus but many patients recover through supportive care and rest. Some four of five patients don’t require care in a hospital and recover at home, though those numbers have been skewed in Spain and nearby Italy because their healthcare systems have been overwhelmed.

Spain’s mortality rate is currently 7.2 percent, with Italy’s even higher, in contrast to the United States and South Korea, which both have rates around 1.4 percent.

The true mortality rates are considered lower in all countries because of the number of patients who experience mild symptoms and don’t get tested.

The new virus is believed to spread mainly from person-to-person between people who are in close contact with one another (within about 6 feet) through respiratory droplets produced when an infected person coughs or sneezes. The droplets can land in the mouths or noses of people who are nearby or be inhaled into their lungs.

Experts recommend preventive measures including frequently washing hands often with soap and water for at least 20 seconds especially after you have been in a public place, or after blowing your nose, coughing, or sneezing; avoiding touching your eyes, nose, or mouth with unwashed hands; and avoiding sick people, or all people if COVID-19 is spreading in your community.