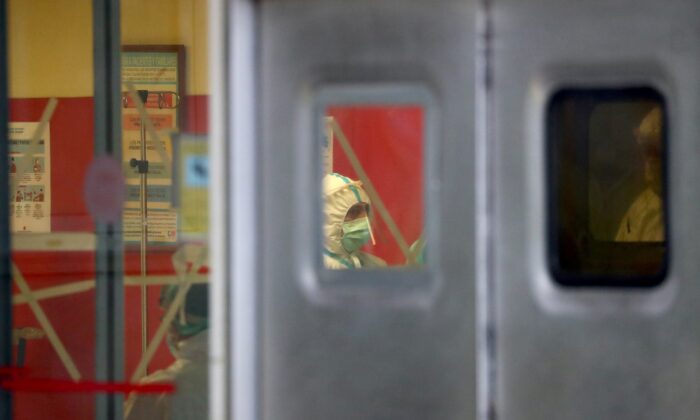 A healthcare worker is pictured through a window of the emergency room of the 12 de Octubre Hospital, amid the CCP virus outbreak in Madrid, Spain on March 31, 2020. (Sergio Perez/Reuters)
WORLD

Spanish authorities said the downward trend in new infections and deaths caused by the CCP virus is holding even amid a slight increase on Tuesday.

In percentage terms, the pace of increases in both contagion and deaths has slowed somewhat in the past few days, health officials said. Health emergency chief Fernando Simon, who tested positive for the virus on Monday, said in a video news conference Spain was unlikely to need further restrictive measures, besides those already announced, while that data was being analyzed.

“It’s true that today we have a slight increase in the number of cases,” said Maria Jose Sierra of the health ministry’s emergencies coordination unit at the press conference. But the downward trend “is continuing,” she added, reported The Local. Nearby Italy reported a daily decrease in its latest figures.

Another 376 patients were hospitalized in intensive care units in Spain overnight, a smaller than normal increase, while nearly 2,500 patients were discharged from hospitals, bringing the total number of cured to 19,259.

Illnesses and deaths are caused by COVID-19, a disease caused by the CCP (Communist Chinese Party) virus, commonly known as the novel coronavirus. The virus emerged in China last year.

Spain is one of the hardest-hit countries in the world. Its mortality rate has registered higher than nearly every other nation and stands now at 8.6 percent, though that figure doesn’t count the slew of mild cases that aren’t confirmed through testing.

However, business leaders criticized the recent tightening of the restrictions, which prevent non-essential workers from leaving their homes, and complained that a lack of consultation with the private sector left companies unprepared.

“Spain is a country where 95 percent of companies are tiny, with just one or two workers. They can’t stay stuck at home, they need to get out and work,” deputy chief of business group CEOE Inigo Fernandez de Mesa said.

Hospitals in Madrid remain overwhelmed and funerals are regularly held across the country but primarily in Spain’s capital of 6.5 million. The number of deaths in the city led to the opening of two makeshift morgues, one at a skating rink and another at a government building erected years ago but never put into use.