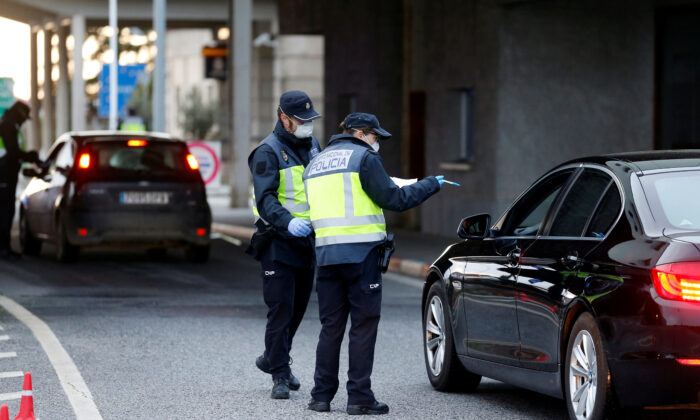 Spanish police officers check a car at the border between Portugal and Spain, following an order from the Spanish government to set up controls at its land borders over the CCP virus, in Vilar Formoso, Portugal, on March 17, 2020. (Rafael Marchante/Reuters)
By Jack Phillips

Spain’s death toll from the CCP virus epidemic has risen by 209 in 24 hours—the worst day so far for the country, according to the health ministry on Thursday.

Spain is now the second worst-hit country in Europe, reporting a total of 767 fatalities from the virus, after Italy. So far, 17,149 cases have been confirmed in Spain, health authorities said.

Days ago, a national emergency was implemented that bans Spaniards from all but essential outings. Officials said about 49 people were arrested for disobeying the ordinance over the past several hours, Reuters reported.

“The toughest moments are still to come, those moments when we will continue to see an increase in the number of cases,” Health Minister Salvador Illa told reporters.

Fernando Simon, the head of the Health Ministry’s Coordination Center for Health Alerts, said the number of cases has risen by about 25 percent over the previous day.

The number of CCP virus cases does not show that “things are going badly,” but it shows that Spain is now at its peak, he argued.

“These are the days where we have to continue making an effort,” he said, according to El Pais. “We know that it is difficult but reaching that peak and starting a stable descent is our objective.”

The Madrid region also called on army personnel to intervene at senior homes to stop a trend of deaths among the elderly. At least 50 elderly in homes have died in the region, El Pais noted.