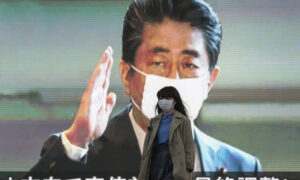 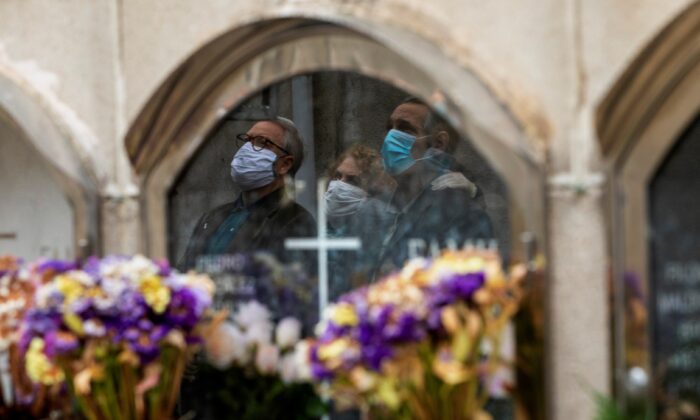 A woman next to her husband (L), and her brother (R), attend the funeral of their mother who died from the CCP virus at the Poble Nou cemetery in Barcelona, Spain, April 18, 2020. (Emilio Morenatti/AP Photo)
WORLD

Health authorities reported 565 deaths in the last 24 hours. The total infections increased to more than 190,000.

As the outbreak’s spread slows, pressure on hospitals has relaxed. Authorities have closed one part of a huge field hospital with thousands of beds set up by the military in a convention center in Madrid.

“The data of hospitalized, deceased, and ICU admissions have maintained a downward trend the past few days,” said health emergency chief Fernando Simón at a press briefing, adding that he hoped to see a steeper decrease soon.

Spain has begun to ease a strict lockdown imposed on March 14 and this week opened up some sectors of the economy, including manufacturing. But most people are still confined to their houses except for essential outings like shopping for food, with even children not allowed out for exercise.

Parliament approved on April 9 a 15-day extension of a state of emergency that brought in the lockdown measures. Socialist Prime Minister Pedro Sanchez said then he was certain he would have to ask again for another extension, which would go into May.

Health authorities in Spain are reshuffling the way to track the pandemic’s impact in the country with new guidelines to count the dead, while an effort to make more tests is counting hundreds of patients cured or without symptoms that weren’t recorded before.

The government says that it’s following World Health Organization guidance and insists on counting only those who die having tested positive for the CCP virus, whether they show symptoms or not and no matter where the death takes place.

Simón said that an effort to rein in a diversity of data from 17 Spanish regions is leading to corrections in past statistics.

“If the data is distorted it becomes difficult to take scientific decisions,” Simón said in a televised press conference.