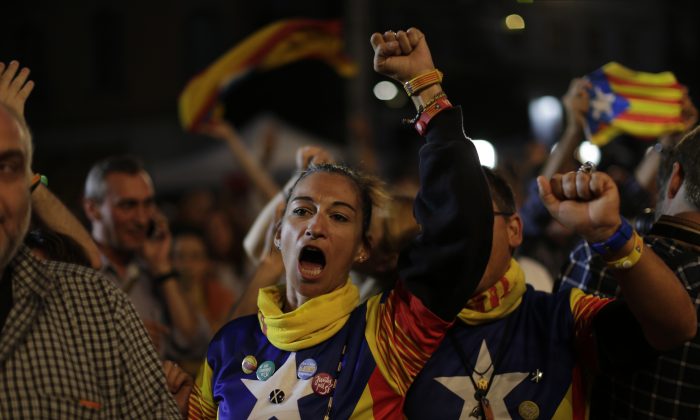 BARCELONA, Spain—Pro-secession parties pushing for Spain’s northeastern Catalonia region to break away and form a new Mediterranean nation won a landmark vote Sunday by capturing a regional parliamentary majority, setting up a possible showdown over independence with the central government in Madrid.

With 99 percent of the vote counted, the “Together for Yes” group of secessionists from across a broad political spectrum had 62 seats in the 135-member regional parliament.

Catalans are fiercely proud of their own distinct language and culture. Many who favor breaking away from Spain say their region, which represents nearly a fifth of Spain’s economic output, pays too much in taxes and receives less than its fair share of government investment. Independence sentiment grew during Spain’s near economic meltdown during the financial crisis.

If the secessionist alliance join forces with the radical pro-independence Popular Unity Candidacy party known as CUP, which won 10 seats, they will have more than the 68 seats needed to try to push forward their plan to make Catalonia independent from Spain by 2017.

CUP had insisted that it would only join an independence bid if secessionist parties won more than 50 percent of the popular vote, but analysts predicted it would drop the demand. The pro-independence parties got a majority in Parliament with only 48 percent of the vote because of a quirk in Spanish election law that gives extra weight to rural voters.

Catalonia’s pro-independence leader Artur Mas claimed victory as a jubilant crowd interrupted him with cheers and chants of “Independence!” in Catalan, which is spoken side by side with Spanish in the prosperous, industrialized region bordering France.

“As democrats we were prepared to accept the defeat. Now, we demand that they accept the victory for Catalonia and the victory of the ‘yes,'” Mas said. “We have a lot of work ahead, we won’t let you down, we know we have the democratic mandate. We have won and that gives us an enormous strength to push this project forward.”

Catalonia’s rural regions are more supportive of independence than urban areas like Barcelona, so the pro-independence parties benefited from the Spanish law giving more representation to rural areas. Critics, however, said the result showed secessionist forces failed to gain legitimacy for their effort and demanded Mas’ resignation.

CUP leader David Fernandez insisted in a television interview that his party will help the “Together for Yes” side and “will not be the one to fail independence.” But differences are already apparent because he has said he wants an immediate declaration of independence rather than the 18-month secession roadmap outlined by the “Yes” bloc.

CUP’s leading parliamentary candidate, Antonio Banos, said his party would not support Mas as president of the regional parliament but analysts predicted it would end up backing the “Yes” bloc and its plan for creating a new state likely to be opposed at every step by Madrid.

“CUP will be under huge pressure to support Mas and the process,” said Antonio Barroso, a London-based analyst with the Teneo Intelligence political risk consultancy.

Secessionists have long pushed for an independence referendum, but Spain’s central government refused to allow it, saying such a vote would be unconstitutional. So the pro-independence parties pitched the vote for regional parliamentary seats as a de facto plebiscite.

The parliament, based in Barcelona, represents the northeastern region of 7.5 million people responsible for nearly a fifth of Spain’s economic output.

Spanish Prime Minister Mariano Rajoy’s ruling Popular Party government says it will use all legal means to prevent Catalonia from breaking away, an exit European leaders have warned would include ejection from the European Union despite claims by secession supporters that a way may be found for an independent Catalonia to stay.

Spain’s government has also said secession by Catalonia would disrupt fragile signs of economic recovery for the country struggling with unemployment of 22 percent.

“These are not the results that we expected or wanted,” he said.

Catalans from both sides of the independence divide extol their Catalan language, spoken by most of the region’s residents and suppressed during Spain’s 1939-1975 dictatorship under Francisco Franco.

Jordi Perez, a 50-year-old civil servant said he voted for “Together for Yes” because he feels Spain has historically disparaged Catalan culture and the region’s language.

“I have wanted independence ever since I was young,” Perez said after voting in Barcelona. “During three centuries they have robbed us of our culture. We have reached the moment that the Catalan people say ‘enough is enough.'”

While the pro-independence camp has organized pro-independence rallies with hundreds of thousands supporters in recent years, those who voted for anti-secession parties have kept a low profile.

School teacher Sandra Guerrero, 30, said the election motivated her to cast a ballot for the first time — against independence with her vote for the Citizens party.

“I am proud to be Catalan, but also to be Spanish,” she said. “I had never voted before because I was disillusioned with politics. But this time I have because this is an important election.”