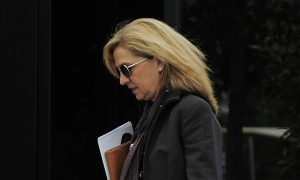 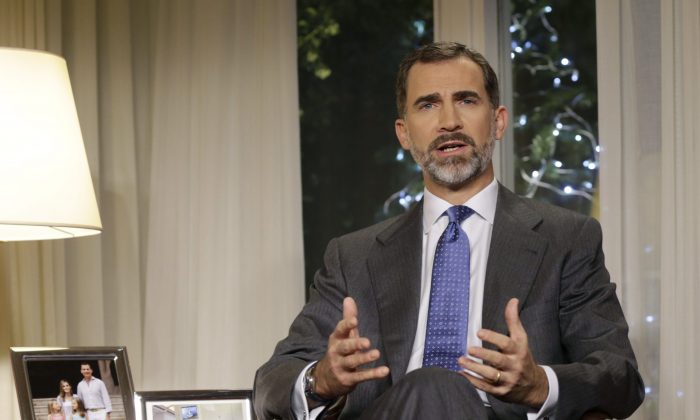 Spain's King Felipe VI gives an speech at the Zarzuela Palce, near Madrid. The speech watched by millions on TV is the most important national address by Spanish kings and is a chance for Felipe to show his style as king six months after his father Juan Carlos abdicated and tell the nation what he thinks about the state of the economically hurting country and what Spaniards must do to improve it. (AP Photo/Angel Diaz)
Europe

MADRID—Spain’s new King Felipe VI insisted in his first Christmas Eve speech Wednesday that seemingly endless examples of corruption across the country must be stamped out, not mentioning his indicted sister by name but stressing that public figures don’t have a right “to profit or become rich.”

The speech watched by millions on TV is the most important national address by Spanish kings, and Felipe gave it after his father Juan Carlos abdicated in June — putting his own stamp on the monarchy.

Felipe told Spaniards they should take heart that some accused of “irregular conduct” are being held accountable in legal proceedings riveting and outraging many.

“There must not be favored treatment for those occupying a position of public responsibility,” Felipe said. “Public office must not be a means to profit or become rich.”

Although the king did not mention his sister by name, Fernando Rayon, an author and royal watcher, said there was no doubt she was referred to.

“It is understood that, logically, his sister and brother-in-law are included in the references to corruption,” said Rayon.

Just two days before Felipe spoke, his sister Princess Cristina was indicted on two counts of tax fraud that could land her in prison for up to eight years, if she is convicted in an alleged scheme that funded a lavish lifestyle for her and her husband at their Barcelona mansion.

Besides Cristina, Spain has seen a cascade of corruption cases hitting politicians from most of the country’s political parties, plus Rodrigo Rato, the Spaniard who headed the International Monetary Fund.

Rato and 32 other one-time board members of Bankia SA — a major bank that had to be nationalized and bailed out by the state for euro18 billion ($24 billion) — are being investigated for suspected mismanagement.

Cristina, 49, is the first royal family member ordered to trial since the monarchy was restored in 1975. She could end up in court toward the end of next year along with her husband Inaki Urdangarin, an Olympic handball medalist turned businessman, and 15 others in the case.

The princess is accused of benefiting financially from an alleged scheme with Urdangarin’s nonprofit Noos organization that allegedly embezzled public funds and syphoned them into Aizoon, a private company owned by the couple.

Most news of the alleged excesses emerged while Juan Carlos was king. And Juan Carlos in 2012 himself eroded much of the respect he earned in decades on the throne after he went on a secret elephant-hunting trip to Botswana at the height of Spain’s financial crisis.

During his own Christmas Eve speech in 2011, Juan Carlos pointedly said that Spanish law “is the same for everyone.”

Felipe also said Spain’s sluggish economic recovery with unemployment now standing at 24 percent is “unacceptable” because young Spaniards who face much higher joblessness are becoming disillusioned with their prospects. Many have left Spain to seek work abroad.

The king’s take on the economy contrasted sharply with statements by Prime Minister Mariano Rajoy and members of his administration, who have been stressing that Spain’s economy is rebounding and is Europe’s fastest growing, thanks to austerity measures they invoked that prevented a financial meltdown.

In a message aimed at reducing secessionist fervor in Catalonia, Felipe said Catalans who speak their own language and pride themselves with a culture they say is distinct are an important part of Spain’s social fabric.

“Millions of Spaniards have Catalonia in their hearts,” Felipe said.

The king appeared seated in a gray suit with an informal light-blue tie rather than the military uniforms favored by his father. Behind him, some Christmas lights glowed on a tree, beside him a poinsettia plant and some seasonal decorations gave a homely air.

On a table next to him were two informal photographs, one of himself with the queen and their two daughters and another in which the monarchs appeared in a relaxed, affectionate pose, her head on his shoulder instead of the canvases of royal ancestors often used by Juan Carlos.

Felipe ended his speech by wishing viewers a happy Christmas in Castilian Spanish and regional languages Basque, Catalan and Galician, another change from his father’s greetings.