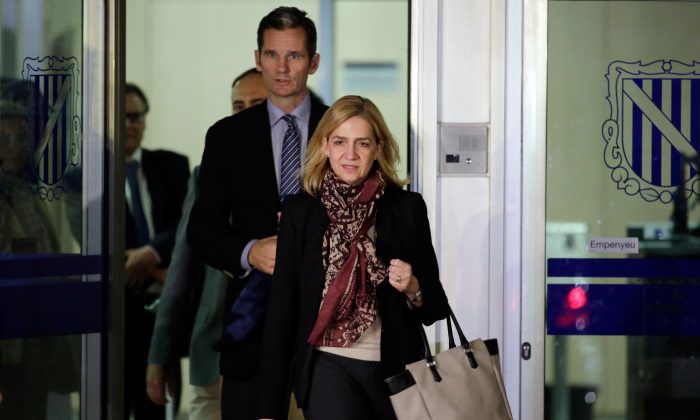 Spain's Princess Cristina and her husband Inaki Urdangarin leave a makeshift courtroom on the first day of a corruption trial, in Palma de Mallorca, Spain, on Jan. 11, 2016. Spain’s Princess Cristina spent 12 hours in court Monday at the start of her landmark criminal case, confronting accusations of bankrolling a lavish lifestyle with funds her husband received from an alleged scheme to embezzle millions from public contracts for conferences and sporting events. (AP Photo/Emilio Morenatti)
Europe

PALMA DE MALLORCA, Spain—Spain’s Princess Cristina spent 12 hours in court Monday at the start of her landmark criminal case, confronting accusations of bankrolling a lavish lifestyle with funds her husband received from an alleged scheme to embezzle millions from public contracts for conferences and sporting events.

Cristina and her husband, Inaki Urdangarin, said nothing during the opening of their trial as their lawyers and attorneys for 16 additional defendants argued why their clients should have charges dropped and made requests about evidence and witnesses for a trial expected to last six months.

One lawyer asked to call Spain’s current and former kings as witnesses and another accused him of trying to turn the trial into a reality show. The judge ended the proceedings by saying the trial would resume in February—when a final decision will be made as to whether Cristina will remain among the defendants or not.

Her lawyer, Jesus Maria Silva, was joined by a prosecutor and a state attorney representing Spanish tax authorities in saying the charges against Cristina should be thrown out because government officials agreed she committed no crimes and should face at most an administrative fine for tax evasion.

The three-member panel of judges hearing the case will decide in coming weeks whether to side with her supporters or with an investigative judge who spent four years probing the case and ruled it could go forward because of evidence presented by a private anti-corruption group.

The judges will have to weigh whether the couple criminally abused the Aizoon real estate consulting firm described in court papers as a “front company” to fund luxury vacations, throw parties at their modernist Barcelona mansion and pay for salsa dancing classes.

Under Spanish law, groups like the Manos Limpias (Clean Hands) organization involved in the princess’ trial can pursue criminal charges against people when authorities decide against doing so.

The trial marks the first time that a member of Spain’s royal family has faced criminal charges since the monarchy was restored in 1975.

Urdangarin and others are accused of embezzling up to 6.2 million euros ($6.8 million) from contracts which were allegedly inflated or never performed. The princess’ husband, formerly the Duke of Palma, is accused of using his title to land the deals for the Noos Institute he ran with business partner Diego Torres.

Torres’ lawyer, Manuel Gonzalez, renewed a request to call former Spanish King Juan Carlos and his son, King Felipe, as witnesses—presumably to elicit testimony suggesting the business dealings of Noos were condoned or approved by the royal family while Juan Carlos was king until 2014.

The requests for them and other witnesses prompted Pedro Horrach, the prosecutor who wants Cristina fined but cleared of criminal wrongdoing, to accuse Gonzalez of “trying to turn the trial into a reality show.”

Cristina and her husband were stoic as sat in a group with the other defendants and they watched the lengthy exchanges between lawyers and judges.

The couple entered court without speaking to reporters under tight security after authorities detained a protester found nearby with an anti-monarchy flag. They left hours after sunset, with the princess appearing to give a slight smile as she departed.

A small group was allowed to protest nearby after the proceedings began—in sharp contrast to 2014 demonstrations by thousands of anti-monarchy protesters while Cristina answered questions posed by an investigative judge.

There are so many defendants and lawyers—plus reporters—involved in the case that judicial officials moved the trial from a courthouse to a sprawling complex on the outskirts of Palma de Mallorca normally used for public servant training courses.

The case is being heard in the regional capital of Spain’s Balearic Islands because many of Urdangarin’s business deals under investigation were for the islands.

Cristina denied knowledge of her husband’s activities during the 2014 closed-door court appearance, but judges decided she could be tried for tax fraud in 2007 and 2008.

The details about the couple’s lifestyle that emerged from the pre-trial investigation from 2011-2014 outraged Spaniards as the country teetered on the edge of an economic crisis and unemployment hit 27 percent.

The case deeply damaged the reputation of Juan Carlos—already smarting from a backlash after he broke his hip during a 2012 elephant-hunting trip seen as an example of royal excess. He abdicated in 2014, saying Spain needed fresh royal blood.

On taking the throne, Felipe pledged to restore public trust in Spain’s monarchy. He later stripped Cristina and her older sister Princess Elena of their roles as official members of the royal family though they have not given up their slots of succession in line for the throne.

Testimony is scheduled to begin Feb. 9 and the trial is expected to last until June. It could take the judges weeks or months following the end of the trial to decide on convictions and sentencing.