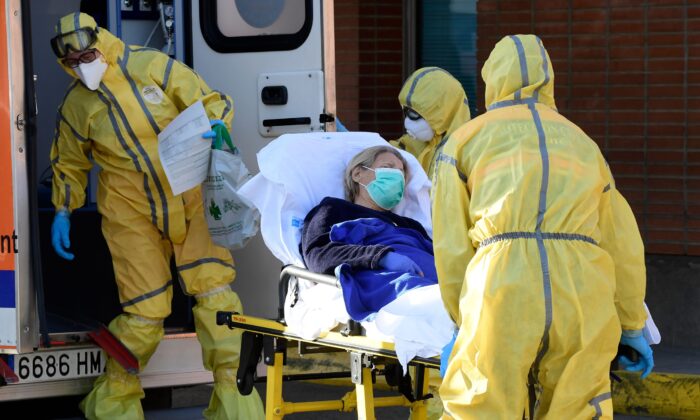 Civil Defence members carry a patient on a stretcher as they arrive at the Severo Ochoa hospital in Leganes, Spain, on March 26, 2020. (Javier Soriano/AFP via Getty Images)
WORLD

CCP virus rapid tests imported from China often fail to detect the virus accurately, according to medical professionals in Spain and Czech Republic. The tests failed in 70-80 percent of cases.

Some countries, including Czech and Spain, bought hundreds of thousands of tests from China that are supposed to show results in less than 30 minutes, as opposed to the several hours needed for the regular tests.

But healthcare professionals have complained that the tests are unreliable.

“The rapid tests, manufactured by the Chinese company Bioeasy, based in Shenzhen, have a sensitivity of 30 percent, when it should be higher than 80 percent,” reported Spanish list El Pais, referring to a source who participated in testing of the kits undertaken at several large Spanish hospitals.

The Chinese embassy in Spain commented to El Pais that Bioeasy hasn’t been licensed by the Chinese regime to sell the tests and wasn’t on the list of suppliers the Chinese trade ministry had given Spain.

Bioeasy didn’t immediately respond to a request for comment.

Czech authorities ordered 300,000 of the rapid tests for some $2 million. At least 150,000 of the test kits have already arrived. They came from Shenzhen, though the authorities haven’t released the name of the supplier.

The tests returned a false positive or a false negative result in about 80 percent of the cases, Czech media reported, referring to regional health officials.

“Unfortunately, the error rate was relatively high so we’re now waiting for results of further testing from the whole country,” said Pavla Svrcinova, public health officer of the Ostrava region in the northeast of the small central European country.

The Czech National Healthcare Institute warned that the tests check for antibodies and thus can’t detect the virus in the first 5-7 days of infection, when the patient is most infectious, but has not yet developed the antibodies.

“It’s not a diagnostic test,” the institute concluded, according to the Czech news site Seznam Zpravy.

The government still intends to use the test as a supportive measure to screen people who already have had symptoms of the infection for several days or who are finishing their two-week quarantine.

The government wanted to use a third of the tests to quickly screen its law enforcement, military, customs officers, and firefighters. It’s not clear whether the tests can still be useful for that purpose.

Czech has been one of the less affected nations with about 2,000 cases and nine dead as of March 27.