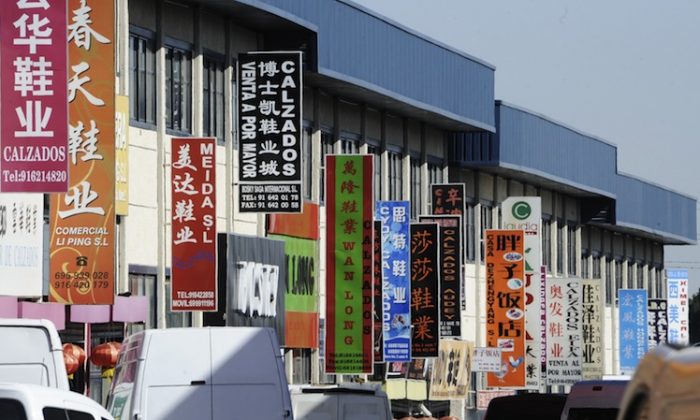 Chinese shops in the Cobo Calleja neighborhood in Madrid. Spain has become the gateway into Europe for cheap Chinese goods. Cobo Calleja, the center of Chinese commerce in Spain has also become a center of money laundering. (Dominique Faget/AFP/Getty Images)
Europe

Spanish police have arrested dozens of people across the country in connection with Chinese organized crime.

More than 60 people were arrested in the operation and are suspected of money laundering from extortion and prostitution, officials told AFP on Tuesday. There are arrest warrants out for at least 108 people.

They are accused of laundering hundreds of millions of euros, with one organization laundering between four and five million euros ($5 million to $6 million) per month, the newspaper said.

“The national police is carrying out a major operation against money-laundering and other crimes linked to criminal networks of Chinese origin in various provinces of Spain,” Spain’s government said in a statement, according to AFP.

Approximately 300 police officers took part in the raid. They searched more than 100 premises, mostly in the capital of Madrid and in Barcelona.

The Spanish National Court carried out a two-year investigation into the criminal network, which smuggled cash into China by train and by car. They used front companies including restaurants and karaoke bars.

Police also arrested a councillor in Madrid’s Fuenlabrada district, which is home to the Cobo Calleja area—the largest Chinese wholesaling area in Europe.