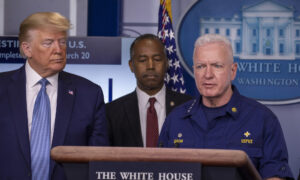 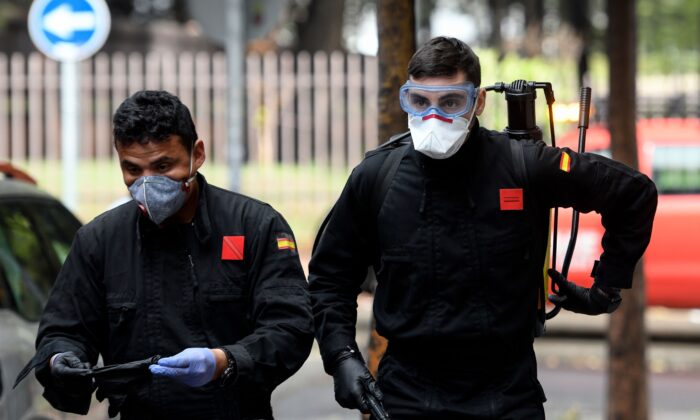 Members of a military emergency unit arrive to carry out a general disinfection at a residence for the elderly in Madrid, Spain, on March 23, 2020. (Oscar Del Pozo/AFP via Getty Images)
WORLD

According to a Johns Hopkins University tally, as of Monday at 2:55 pm ET, there were 33,089 confirmed cases of the respiratory disease in Spain, with 2,207 deaths. According to a Reuters tally, 462 people died there in the last 24 hours, the highest daily toll in the second-hardest European country to be hit by the CCP virus, after Italy.

Spain’s Minister of Defense said as numbers of the deadly respiratory disease soar in the country, responders have found elderly people dead in their residences, left behind.

Margarita Robles told broadcaster Telecinco that members of the specialist Military Emergencies Unit had found the corpses in the course of their duties, which include visiting nursing homes.

“During some of its visits, the army has seen some totally abandoned elderly people—even some who were dead in their beds,” Robles told the Ana Rosa TV program, The Guardian reports. She called the discovery an outcome of inhumane treatment that would not go unpunished and urged care staff to take their responsibilities seriously.

The virus has also infected nearly 4,000 Spanish health workers, who make up more than a tenth of known cases in the country.

The rising death count has put pressure on hospitals and funeral homes around Madrid, prompting health authorities to set up a makeshift morgue at the Palacio de Hielo, a large ice rink.

“This is a temporary and extraordinary measure primarily intended to mitigate the pain of victims’ families and the situation in Madrid’s hospitals,” the officials said on Monday, according to The Guardian.

The repurposed skating facility is close to a conference center that has been kitted out with hospital beds and already received 126 of the 1,300 patients it expects in the coming week.

Soldiers were also deployed to Barcelona to help build a temporary homeless shelter at the city’s Fira event center.

The shelter, to be managed by the Red Cross, will allow up to 1,000 homeless people to isolate themselves in hygienic conditions, Barcelona’s Mayor Ada Colau said.

The official in charge of the health emergency, Fernando Simon, said 87 percent of those who had died were aged 70 or older.

On Monday, the head of the World Health Organization called on countries to take strong, coordinated action to stem the accelerating outbreak.