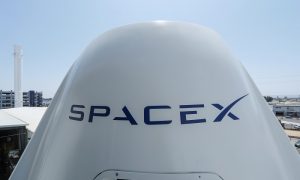 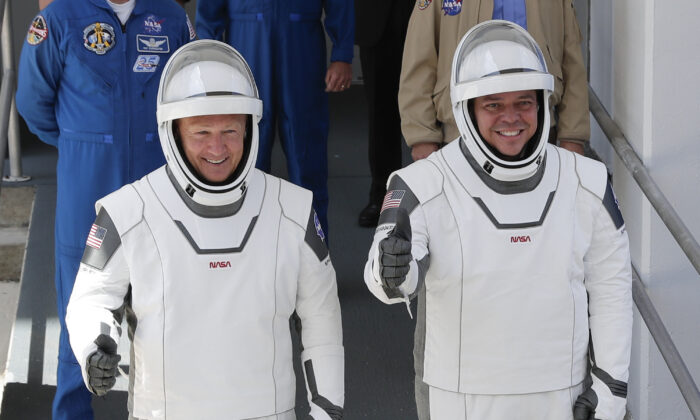 NASA astronauts Douglas Hurley (L) and Robert Behnken walk out of the Neil A. Armstrong Operations and Checkout Building on their way to Pad 39-A, at the Kennedy Space Center in Cape Canaveral, Fla., on May 30, 2020. (John Raoux/AP photo)
Space

SpaceX’s Crew Dragon spacecraft docked at the space station at 10:16 a.m. ET Sunday morning after launching from Florida’s Kennedy Space Center Saturday and traveling 19 hours. After making initial contact with the ISS, Crew Dragon went through a series of steps to further mate the spacecraft with its port—including linking power and creating an air-locked seal—before first of two hatches were opened. Behnken and Hurley are expected to remain on board the space station for one to three months.

It was the first time a privately built and owned spacecraft carried astronauts to the orbiting lab in its nearly 20 years. NASA considers this the opening volley in a business revolution encircling Earth and eventually stretching to the moon and Mars.

Despite the COVID-19 pandemic, thousands jammed surrounding beaches, bridges and towns to watch as SpaceX became the world’s first private company to send astronauts into orbit, and ended a nine-year launch drought for NASA. The achievement, years in the making, is expected to drive down launch costs so more people might be able to afford a ticket to space in the coming years.

A few hours before docking, the Dragon riders reported that their capsule, newly named Endeavour after the retired shuttle, was performing beautifully. Just in case, they slipped back into their pressurized launch suits and helmets for the rendezvous.

Gleaming white in the sunlight, the Dragon was easily visible from a few miles out, its nose cone open and exposing its docking hook as well as a blinking light. The capsule loomed ever larger on live NASA TV as it closed the gap.

Hurley and Behnken took over the controls—using high-tech touchscreens—and did a little piloting less than a couple hundred yards (meters) out as part of the test flight, before putting it back into automatic for the final approach. Hurley said the capsule handled “really well, very crisp.”

The astronauts thanked everyone once the capsule was latched securely to the space station. The only snag appeared to involve Dragon’s communication lines: The astronauts could barely understand the calls coming from Houston’s Mission Control following the linkup.

“It’s been a real honor to be just a small part of this nine-year endeavor since the last time a United States spaceship has docked with the International Space Station,” Hurley said. He was the pilot of that last spaceship, shuttle Atlantis in July 2011.

Given the continuing high-risk drama, SpaceX and NASA officials had held off on any celebrations until after Sunday morning’s docking—and possibly not until the two astronauts are back on Earth sometime this summer. Clearly relieved, NASA Administrator Jim Bridenstine tweeted a big “welcome home” to the Dragon fliers—“America’s two favorite dads.” SpaceX has been calling them “dads” to drive home the fact that two lives were at stake in this highly technical effort.

NASA has yet to decide how long Hurley and Behnken will spend at the space station, somewhere between one and four months. While they’re there, the Dragon test pilots will join NASA’s Cassidy and two Russian station residents in performing experiments and possibly spacewalks to install fresh station batteries.

While U.S. astronauts will continue to catch a ride on Russian Soyuz rockets, it will be through a barter system now that NASA’s commercial crew program has finally taken flight. NASA had been shelling out tens of millions of dollars for every Soyuz seat.

In a show-and-tell earlier Sunday, the astronauts gave a quick tour of the Dragon’s sparkling clean insides, quite spacious for a capsule. They said the liftoff was pretty bumpy and dynamic, nothing the simulators could have mimicked.

An old-style capsule splashdown is planned.

After liftoff, Musk told reporters that the capsule’s return will be more dangerous in some ways than its launch. Even so, getting the two astronauts safely to orbit and then the space station had everyone breathing huge sighs of relief.

As always, Musk was looking ahead.

“This is hopefully the first step on a journey toward a civilization on Mars,” he said Saturday evening.

By Marcia Dunn. The CNN Wire contributed to this report.