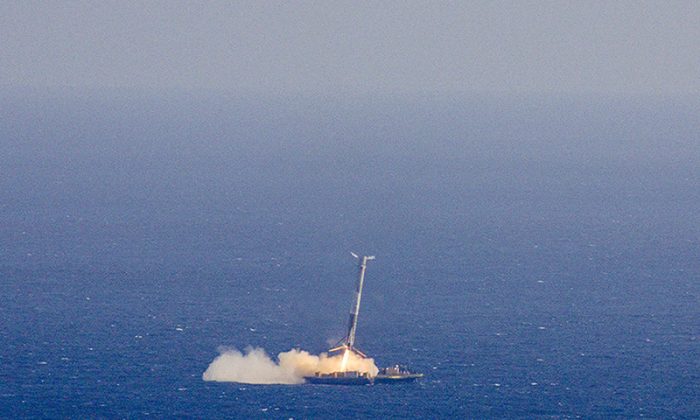 A previous attempt to land a Falcon 9 rocket on a robotic barge in the Atlantic Ocean on April 14, 2015 (SpaceX.com)
Tech

SpaceX to Land Next Falcon 9 Rocket in Pacific Ocean

In December, SpaceX landed its Falcon 9 rocket upright after it had traveled to space, marking a leap forward in the development of re-usable rockets.

Amazon and SpaceX itself had previously landed re-usable rockets that descended from sub-orbital space, but the December landing was a first for a rocket meant to deliver cargo and satellites into orbit, and none as flew as far into the stratosphere as the Falcon 9.

Now, SpaceX plans to repeat this feat on Jan. 17th, except this time the Falcon 9 is to land on a naval drone ship in the Pacific Ocean instead of a launchpad on solid ground.

The rocket will launch from Vandenberg Air Force Base in California, carrying a NASA’s Jason-3 satellite that will be deployed to monitor weather patterns on the ocean’s surface, NBC reports.

The Jan 17. launch won’t be the first time SpaceX has tried to land a rocket at sea. The company made two failed attempt to land the Falcon 9 rocket on a barge in the Atlantic in January and April of last year, with the latter caught on tape.

Reusable rockets would enable NASA, which has experienced budget reductions in recent years, and other space agencies to cut down on the cost of space missions.

“A jumbo jet costs about the same as one of our Falcon 9 rockets, but airlines don’t junk a plane after a one-way trip from LA to New York. Yet when it comes to space travel, rockets fly only once—even though the rocket itself represents the majority of launch cost,” SpaceX.com states.