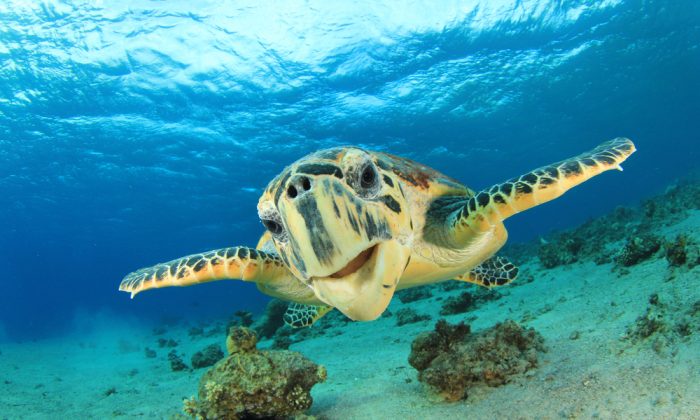 A satellite-tracking study of green turtles in the Indian Ocean has rewritten the record books for long-distance marine animal migration, showing that they can travel some 4000 kilometres without stopping for food.

The Chagos Archipelago protected area covers 640,000 square kilometres around the isolated group of islands in the middle of the Indian Ocean. When it was set up in 2010 it was the world’s largest marine protected area and supports some of the most pristine coral reefs.

My colleagues and I monitored the movements of the green turtle, a migratory species that breeds on the Chagos Islands. We attached small tags to the shells of eight nesting turtles, and then tracked them by satellite for more than a year.

Green turtles are found in tropical and subtropical waters, mainly in the Atlantic and Indo-Pacific. They are officially endangered, and are hunted both legally and illegally for food. They also fall victim to fishing by-catch or boat collisions as they move through the sea.

Green turtles are some of the most accomplished long-distance travellers on the planet. Several decades ago the migration of green turtles was documented between their isolated nesting beaches on Ascension Island, in the middle of the Atlantic, and their feeding areas more than 2000 km away on the Brazilian coast. This was thought to be the longest migration this species could undertake. The navigational feats of animals finding remote targets in the vast ocean expanses have continued to perplex scientists.

Green turtles need extraordinary physiology to complete these journeys. They are vegetarian, feeding on sea grass and seaweed. On this diet, green turtles can grow to 1.5 metres in length, weigh around 300 kilograms, and live for many decades. Yet during their long migrations they do not feed, relying instead on stored fat reserves. Similar-sized warm-blooded mammals, like seals or dolphins, would be unable to complete such a trip without starving to death.

Our work shows that networks of small protected areas need to be developed alongside larger ones, so species that migrate long distances can stay in safe zones for as much time as possible. The Chagos Archipelago protected area certainly has huge conservation benefit. As well as protecting coral reefs and other important habitats and species, it will also protect turtles during key periods of their lives, during nesting and incubation.

But international cooperation will be required to develop the network of small protected areas across the Indian Ocean that will be needed to protect the turtles at other times of their lives.

The challenge will be to translate our results into some real-world impact, in terms both of maintaining large marine parks, and of establishing effective networks of smaller protected areas to work alongside them.

Turning scientific findings into real-world conservation measures will help not just sea turtles, but also the many other endangered species that need our help too.

Graeme Hays does not work for, consult to, own shares in or receive funding from any company or organisation that would benefit from this article, and has no relevant affiliations. This article was originally published on The Conversation. Read the original article.

*Image of “turtle” via Shutterstock.