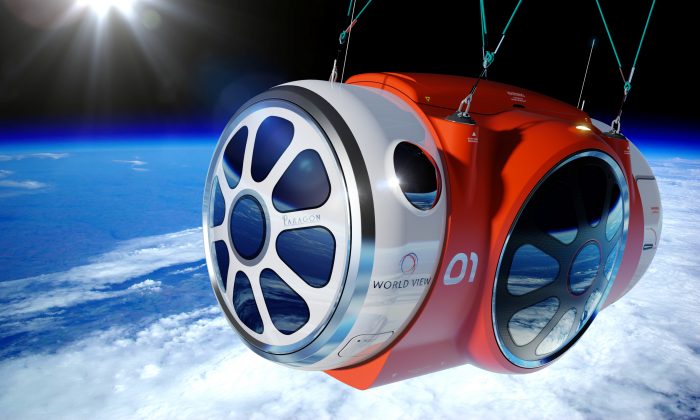 An undated image provided by World View shows an illustration of the World View space capsule which is complete with Wi-Fi, a bar, a lavatory and a 360-degree view. (World View via AP)
Science

Space Tourism Projects at a Glance

Virgin Galactic later this month in Mojave, California, is preparing to roll out its new SpaceShipTwo, a vehicle the company hopes will one day take tourists to the edge of space. It comes roughly 15½ months since an earlier incarnation was destroyed in a test flight, killing one of the pilots. Despite the setback, the dream of sending tourists to the edge of space and beyond is still alive. Space tourism companies are employing designs including winged vehicles, vertical rockets with capsules and high-altitude balloons.

A look at projects currently under development:

The most prominent space tourism program, the commercial space line founded by adventurer-business mogul Sir Richard Branson will use a winged rocket plane dubbed SpaceShipTwo, successor to SpaceShipOne, which in 2004 won the $10 million Ansari X Prize that was intended to spur the industry’s development.

SpaceShipTwo is designed to be flown by two pilots and carry up to six passengers on a suborbital trajectory to altitudes above 62 miles (100 kilometers), an internationally recognized boundary of space.

Like early U.S. X-planes, Virgin Galactic’s craft will be carried aloft by another aircraft, called WhiteKnightTwo, and released at about 50,000 feet before its rocket engine is ignited for a supersonic thrill ride to the fringes of space and a view of the Earth far below.

The space line says SpaceShipTwo’s cabin is roomy enough for passengers to float during a few minutes of weightlessness before beginning an unpowered glide to a runway landing.

A key feature of the design is the so-called feathering system — a term derived from the feathers of a badminton projectile. Twin tails extending rearward from the tips of each wing rotate upward as a means to slow and stabilize SpaceShipTwo as it re-enters the atmosphere. The “feathers” then rotate back to their normal position for the rest of the glide and landing.

Virgin Galactic’s first SpaceShipTwo was destroyed on Oct. 31, 2014, when a co-pilot prematurely unlocked the feathers during a powered test flight and aerodynamic forces broke the craft apart. The co-pilot was killed but the pilot parachuted to safety. The company will roll out its new SpaceShipTwo later this month in Mojave, California, but the timeline for testing and commercial operation has not been released.

Hundreds of people have put down deposits of $250,000 for a chance to fly into space with Virgin Galactic, which plans to operate from Spaceport America in New Mexico.

Like Astronaut Alan Shepard’s pioneering 1961 flight during Project Mercury, the capsule separates from the booster rocket and descends beneath parachutes without going into orbit around the Earth.

The unconventional twist is reusability.

Blue Origin recently conducted a test launch from Texas in which the rocket dubbed New Shepard performed a vertical landing, slowing its descent by relighting its engine as it fell back to Earth. In January, the company launched the same rocket and it again landed intact.

Blue Origin says that during flights passengers will experience a few minutes of weightlessness after the capsule separates from the booster. Passengers will be able to leave their seats and float about the capsule before a signal tells them to be reseated for landing.

The company has chosen Florida for its base of operations. Details of space tourism operations have not been released.

The company has spent years developing a rocket plane named Lynx that is intended to be capable of making multiple flights each day with a pilot and one passenger aboard.

Unlike Virgin Galactic’s SpaceShipTwo, the Lynx will take off under its own power from a runway, climb toward space and then glide back to a runway landing. XCOR also plans flights surpassing an altitude of 62 miles.

In December, the company said it reached a milestone in development of the Lynx propulsion system by successfully using waste heat to drive essential engine parts, eliminating the need for large and heavy tanks of compressed gas.

“The fact is that we are in a process in which you just can’t rush things,” Lynx test pilot Harry van Hulten said in press release last fall.

The Arizona company plans to loft passengers to altitudes above 100,000 feet in a capsule suspended below a “parawing” and a helium balloon.

The trip some 19 miles high would be to “near space” but would give a substantial view of the Earth far below while avoiding the stress of G forces endured during rocket flight.

Compared to flights on rocket-powered space tourism vehicles offering a few minutes at the top of a suborbital trajectory, World View envisions spending two hours at the maximum altitude, with amenities such as a lavatory.

The two-member crew then begins the landing process by venting helium until the capsule descends to 50,000 feet. The balloon is then released and the parawing allows the capsule to glide to a landing spot.

The company announced last month that it plans to conduct launches from Spaceport Tucson.