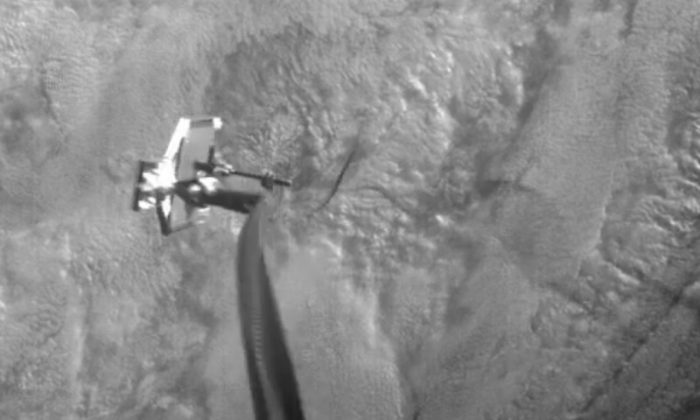 A harpoon striking a square target mounted 1.5 meters (5 feet) from the RemoveDEBRIS spacecraft on Feb. 8, 2019. (RemoveDEBRIS Consortium via AP)
Space

CAPE CANAVERAL, Fla.—A harpoon flung from a satellite has successfully captured a piece of pretend space junk, like a whale.

The British-led experiment is part of an effort to clean up debris in orbit, hundreds of miles above Earth.

The University of Surrey’s Guglielmo Aglietti said Friday that the steel-tipped harpoon scored a bull’s-eye last Friday. The harpoon—no bigger than a writing pen—pierced an aluminum panel the size of a table tennis racket attached to the end of a satellite boom. The distance was just 5 feet (1.5 meters), but researchers were delighted.

A video shows the harpoon slamming into the target and knocking it off its perch, and then the harpoon cable becoming entangled around the boom.

The RemoveDebris experiment has successfully harpooned a sample of space junk, as engineers test different ways to clean up the growing trash pile in Earth orbit. https://t.co/Me1EPaofZl pic.twitter.com/xmKnfNJAcO

Aglietti said a much bigger harpoon will be needed in order to snare a real dead satellite—“Moby Dick style.” Thousands of old satellite and rocket parts, and other junk circle Earth, a potential threat to working spacecraft, including the International Space Station.

The same team used a net to capture a piece of space junk, in a test last September. And in December, they tracked a tiny satellite ejected from the mother ship, using lasers.

“We are very happy because so far, we have done three experiments and all three have been working,” Aglietti said by phone from England.

All that remains is for the 250-mile-high (400-kilometer-high) satellite to re-enter the atmosphere and burn up. If all goes according to plan, a sail will inflate in March and eventually drag the satellite down, its mission accomplished.

Aglietti said the next step for the consortium, which includes Airbus, would be to offer this as a real service and go after real space debris.