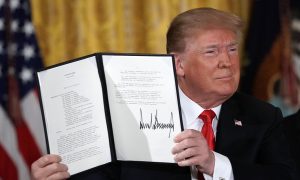 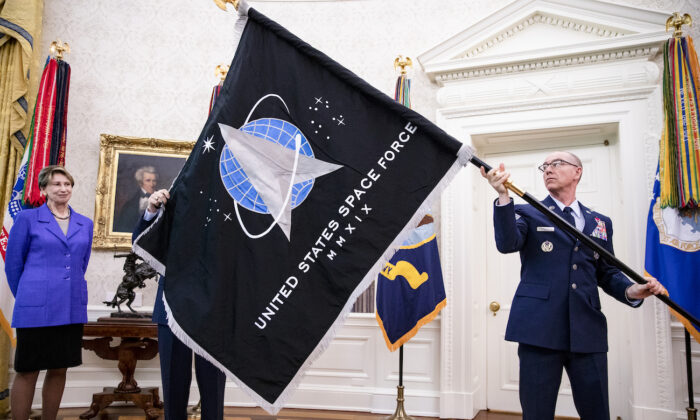 Gen. Jay Raymond (R), Chief of Space Operations, and CMSgt Roger Towberman (L), with Secretary of the Air Force Barbara Barrett present President Donald Trump with the official flag of the United States Space Force in the Oval Office of the White House in Washington, on May 15, 2020. (Samuel Corum-Pool/Getty Images)
Politics

White House press secretary Jen Psaki said late Tuesday that the White House will continue the work of the U.S. Space Force, after Republican leaders demanded an apology over her remarks earlier in the day that referenced the sixth military branch in a trivial manner.

“We look forward to the continuing work of Space Force and invite the members of the team to come visit us in the briefing room anytime to share an update on their important work,” Psaki wrote on Twitter late Tuesday.

The announcement marks the first time the Biden administration has said that the military branch established under former President Donald Trump will continue its work. Undoing the Space Force would require congressional approval.

Psaki’s Twitter announcement comes after Rep. Mike Rogers (R-Ala.), the House Armed Services Committee’s top Republican, demanded that she apologize over her remarks earlier on Tuesday over a reporter’s question on the Space Force.

Psaki was asked at a White House press briefing whether President Joe Biden has decided whether to maintain or maintain the scope of the Space Force.

“Wow, Space Force. It’s the plane of today,” Psaki responded with a jokey expression, to which the reporter was heard trying to reply, before Psaki added: “It is an interesting question. I am happy to check with our Space Force point of contact. I’m not sure who that is. I will find out and see if they have any update on that.”

The “plane of today” comment appeared to refer to a question that Psaki received at the very first briefing of the administration, where she was asked about whether Biden would keep former President Donald Trump’s Air Force One paint job.

In response to Psaki’s remarks, Rogers said in a statement, according to Politico, “It’s concerning to see the Biden administration’s press secretary blatantly diminish an entire branch of our military as the punchline of a joke, which I’m sure China would find funny.”

“The Space Force was passed with near unanimous support in Congress, the same type of ‘unity’ President Biden is supposedly working towards,” he added. “Jen Psaki needs to immediately apologize to the men and women of the Space Force for this disgraceful comment.”

Rep. Michael Waltz (R-Fla.), a founding member of the House Space Force Caucus, also criticized the remarks. In a statement to the outlet, he said, “This is just another example of the Biden administration not taking China seriously while demeaning the incredible work of Space Force personnel.”

Waltz wrote later on Twitter, “While the Biden Administration continues to think about whether or not the #CCP is a threat, China is working overtime to become the dominant force in space. We need the professionals, @SpaceForceDoD, to keep Americans safe.”

Trump signed an executive order in 2018 directing the Department of Defense to create the Space Force, and signed a defense bill in 2019 that established it as a sixth branch of the military to deal with national space security and developing threats. It marked the first time a new military service had been created in more than 60 years.

In 2020, the Department of Defense released a strategy for how to maintain U.S. superiority in space. The Pentagon identified China and Russia as its most immediate threats.