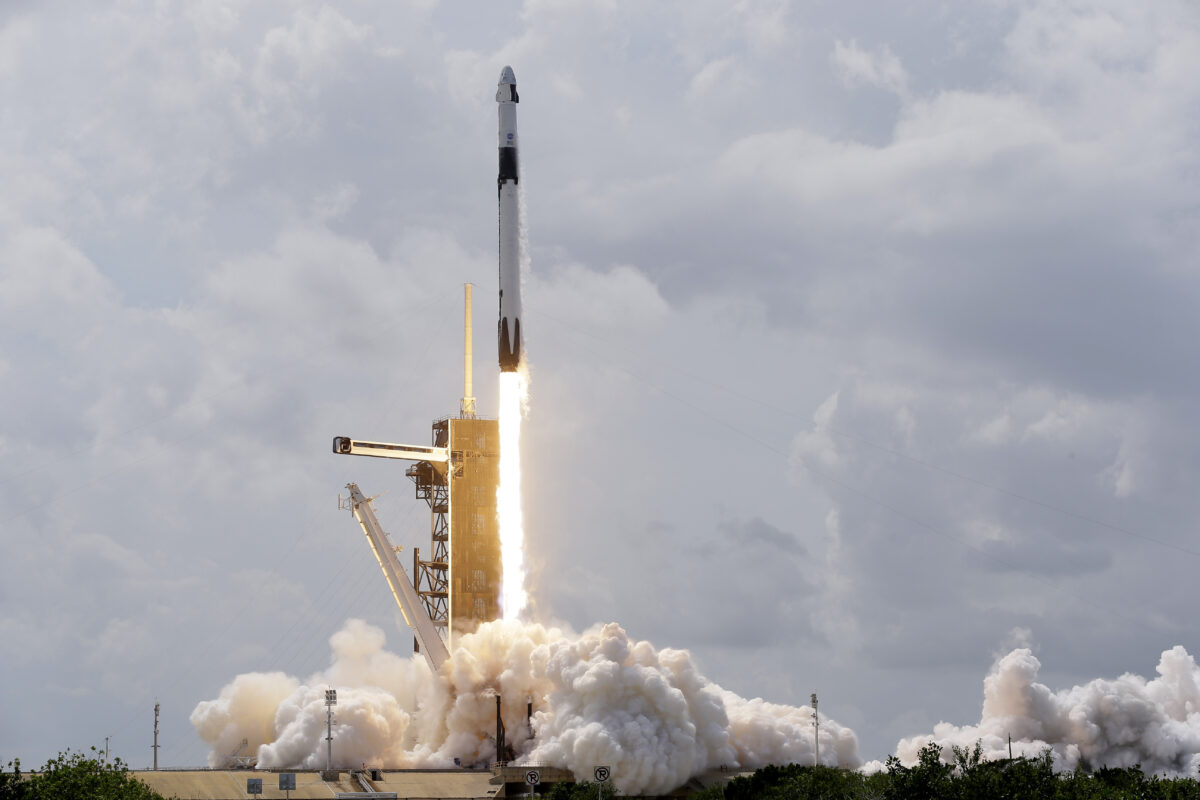 After achieving political escape velocity last year, the U.S. Space Force’s bureaucratic second-stage engine, set to propel it for the next decade, has silently kicked in.

The U.S. Defense Space Strategy, published last week, offers little Sci-Fi romance and plenty of dry pronouncements, but according to analysts, it’s an important step for the U.S. military as it orientates itself toward great power competition with Russia and China.

For now, space warfare might be crudely understood as predominantly satellite warfare. That is, the protection, weaponization, and neutralization of the all-seeing, all-knowing information architecture that holds up the military and modern society—especially the vital GPS system that guides ballistic missiles to their targets, allows you to pull cash out of an ATM, and even guides electricity through the grid.

But China’s space ambition reaches beyond jamming and taking down satellites—to the moon and further into deep space. According to analysts, leaders in Beijing see space supremacy as vital to the Chinese Communist Party’s very survival.

The U.S. Space Force was launched in 2019, joining the Army, Navy, Air Force, Coast Guard, and Marine Corps as a distinct fighting force—the first time a new military service has been created for more than 60 years.

The strategic framework on which the Space Force will be built has now been laid out in the Defense Space Strategy.

“China and Russia each have weaponized space as a means to reduce U.S. and allied military effectiveness and challenge our freedom of operation in space,” according to the unclassified version of the Space Strategy document, published on June 17 (pdf). The document lays out the structure that is needed to achieve a “comprehensive military advantage” in space within 10 years.

Three key objectives are identified for the Space Force: to maintain America’s space superiority; to provide space support to all joint military operations; and to “ensure space stability”—i.e., to deter aggression and uphold international agreements in space with a persistent presence, similar to how the Navy polices international waters.

“Space is now a distinct warfighting domain, demanding enterprise-wide changes to policies, strategies, operations, investments, capabilities, and expertise for a new strategic environment,” according to the document.

John Venable, senior research fellow for Defense Policy, Center for National Defense, describes the document as foundational. He likens it to the 2018 National Defense Strategy that explicitly re-orientated the military as a whole to face China and Russia as military competitors.

“There are important declarations in there,” he told The Epoch Times.

Venable said that the Air Force recognized space would be a warfighting environment as early as the 1950s, as the space program began to take shape.

President Dwight D. Eisenhower, however, had a different vision.

“President Eisenhower himself set the standard for what the Air Force and DOD writ large would be able to do with space for the next 60 years—when he said he wanted space to be used as a peaceful environment,” he said.

“All the way up until the Trump administration, the military has been constrained on what it can do,” said Venable, adding that the United States now has little choice but to counter Russian and Chinese weaponization of space.

“While China and Russia have been actively developing ASAT (anti-satellite) programs and testing successfully those programs, we’ve been basically looking the other way.”

According to the Defense Intelligence Agency (DIA), China is second only to the United States in the number of operational satellites, with more than 120 devoted to intelligence, surveillance, and reconnaissance.

“PLA analysis of U.S. and allied military operations states that “destroying or capturing satellites and other sensors” would make it difficult to use precision-guided weapons,” notes the latest DIA report on space (pdf). “Moreover, PLA writings suggest that reconnaissance, communications, navigation, and early warning satellites could be among the targets of attacks designed to ‘blind and deafen the enemy.'”

China splits space into two basic domains, according to Rick Fisher, a senior fellow at the International Assessment and Strategy Center, and an Epoch Times contributor.

“First is the Earth-Moon system, which as it says, encompasses the Earth, the Moon, the space in between, and the strategic Lagrangian Points,” Fisher told The Epoch Times via email. “The latter are locations where there is sufficient gravitational pull between the Earth and Moon to sustain an object in space with little use of fuel.”

The second domain is deep space, said Fisher. “Let’s say in 15 to 50 years, commercial space companies become very active on the Moon and Mars. Then, Deep Space control will become a key objective for the PLA.”

Fisher said that the Chinese Communist Party sees control of space as central to its existence.

“China cannot be convinced to stop its pursuit of space control because that is required to achieve political-military hegemony on Earth, which the Chinese Communist Party (CCP) requires for its survival as a harsh dictatorship in China. In short, without space control, the CCP likely believes that it cannot survive.”

“Space warfighting is a still emergent component of great power conflict,” Bunker told The Epoch Times via email. “We can divide such a physical capacity into launch systems (single and multi-use rockets), spacecraft (manned and unmanned), deployable payloads, weaponry, and C4ISR functions.”

“As would be expected, a first-strike capability to wipe out as much of U.S. military and commercial (which themselves have fall-back military utility) space assets—primarily satellites—as possible is one strategy being explored by the CCP regime to destroy our global C4ISR capabilities.”

Bunker said there is a danger that the United States is looking at space warfare operationally while China is looking at it strategically. “China is actively shaping the space warfighting environment—that is to say, creating the necessary conditions to achieve victory in the case of a limited or more sustained shooting war, or even better, to be able to achieve its desired end states without even having to fire a shot.”

“In other words, the U.S. is trying to get the most out of its poker hand and yet never seeing the bigger picture as its pile of chips dwindles whereas China is a grandmaster player engaging in a game of ‘Go.'”

(Military strategists have noted that unlike games such as chess, which have a clear moment of victory, ‘Go’ is about growing occupied space.)

With space seen as the “ultimate global high ground,” he said, Beijing will guard its strategies carefully. “Full-spectrum passive and active deception, propaganda, and political warfare programs will be in effect to protect such warfighting strategies and capabilities.”

Fisher said that such deception has the added advantage of allowing China to try to seize the moral high ground.

“China does not reveal its strategies for space warfighting, but they surely exist and are highly classified.  This is done in part to allow China to deny that it has ambitions for military space control and to characterize as aggression, any American move to defend its interests in space.”

The State Department has increasingly poured scorn on China’s and Russia’s attempts to ramp up their military efforts in space at the same time as pushing various space arms initiatives.

Alongside jammers and dazzlers, Russia has also demonstrated the capability of using satellites to flick other satellites out of orbit, which would destroy them without triggering a cascade of space debris that could endanger all satellites, said Venable.

The potential of cascading mutual satellite destruction has been interpreted by some as being akin to the MAD doctrine that neutralizes opposing nuclear weapons.

But Venable thinks the parallels don’t hold, because Russia and China are less reliant on their satellite systems than the United States, presenting a strategic imbalance.

“Their pilots navigate via maps. While they can’t hit as accurately as we can, with their munitions, they can at least threaten our personnel, our vehicles, our facilities [without satellite systems]. We can’t. And this is something where we have to develop backup capabilities.”

He said that China and Russia regard the GPS system as the Achilles heel of the United States. “If they can take that away from us, then they really hurt us.”

The creation of a Space Force, in addition to the newly minted Space Command, allows specialist expertise to better reach the battlefield, said Venable.

Before the creation of the Space Force, troops provided to the space domain had cut their teeth on training based around land, sea, and air warfare, which Venable said is limiting.

The Space Force will be able to provide specialized units to combatant commanders.

He gives the example of how the Navy provides medics to the Marine Corps.

“This will be the same thing that will happen with the Space Force. You’ll have Space Force personnel assets deployed with Army, Navy, and Air Force personnel and they will be forward deployed, maybe not on the leading edge of the battlefield, but back at the combined operations center, for example.”

The Space Defense Strategy also calls for cooperation with industry.

Venable believes that the United States will quickly start pulling ahead in the military space race.

“Our corporate structure is going to develop the systems for us much faster than anybody can keep up with,” he said.

“Companies like Lockheed Martin and Boeing are doing extraordinary work for us, behind the scenes, developing sensors, allowing us to detect certain targets better than anybody else. Also [they are working on] offensive systems that we won’t learn about for years—if we ever do.”