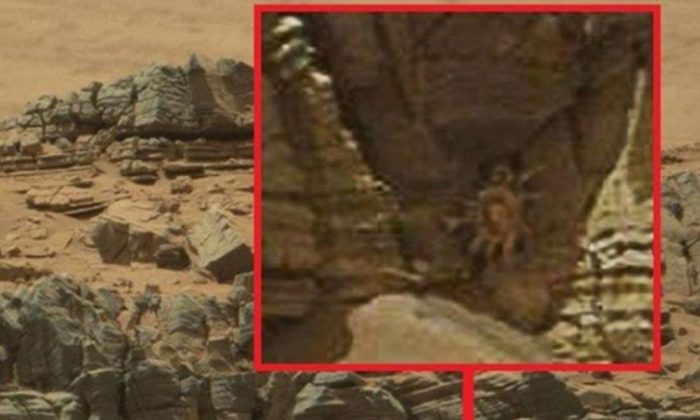 A NASA photo taken of the surface of Mars has many people on social media wondering if there’s a giant space crab living on the Red Planet.

No, it’s probably not a crab monster.

Posted by Journey to the Surface of the MARS on Saturday, August 1, 2015

Seth Shostak, who is the Senior Astronomer and Director of the Center for SETI Research, told the Huffington Post that he gets photos showing rock formations like this one about once per week.

“Those that send them to me are generally quite excited, as they claim that these frequently resemble SOMETHING you wouldn’t expect to find on the rusty, dusty surface of the Red Planet,” he told the site via email. “It’s usually some sort of animal, but occasionally even weirder objects such as automobile parts. Maybe they think there are cars on Mars.”

Many people thought images taken in 1976 by the Viking 1 mission showed a face on Mars that could have been the remnants of an ancient civilization.

He said it’s a phenomenon called pareidolia, which is the brain’s ability to create shapes out of random objects—like seeing animals in clouds, faces in rocks, or objects in ink blot tests. “Far from being a vision defect, pareidolia has a lot of survival value if you need to quickly spot predators in the jungle, for instance,” he added.

“Recognizing a crab in a landscape filled with wind-weathered rocks is no more surprising—nor more significant—than seeing a winking face in a semi-colon followed by a parenthesis. ; ) “

Also, some social media users claim there’s a “Yeti” peeking out from behind a rock in the same picture.

A study in 2012 tried to make more sense of pareidolia.

The study, published in the Proceedings of the Royal Society, “used functional magnetic resonance imaging (fMRI) to pinpoint the spot in the brain in which pareidolia plays out, and determined that it’s actually in two spots called the left and right fusiform gyrus,” writes Time magazine, citing the study.

Photos taken on Mars have been the subject of many, many conspiracy theories, and they’re not limited to pyramids, statues, levitating spheres, and even a head that resembles President Barack Obama.

Here’s a few famous examples of pareidolia, according to LiveScience:

A prime example of pareidolia and its connection to religious images is the Shroud of Turin, a cloth bearing the image of a man — which some believe to be Jesus — who appears to have suffered trauma consistent with crucifixion. The negative image was first observed in 1898, on the reverse photographic plate of amateur photographer Secondo Pia, who was allowed to photograph it while it was being exhibited in the Turin Cathedral.

Some visitors to St. Mary’s in Rathkaele, Ireland, say a tree stump outside of the church bears a silhouette of the Virgin Mary.

Damage to the Pedra da Gávea, an enormous rock outside Rio de Janeiro, Brazil, created an impression that many interpret as a human face.

Many people thought images taken in 1976 by the Viking 1 mission showed a face on Mars that could have been the remnants of an ancient civilization.

Pareidolia is seeing believing? Pareidolia may be a term many are not familiar with the m http://t.co/ftACWA2Dut pic.twitter.com/jdaU29NXK5