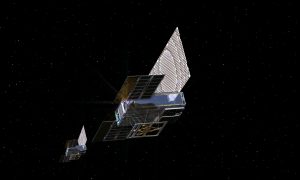 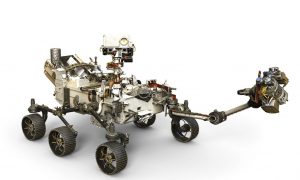 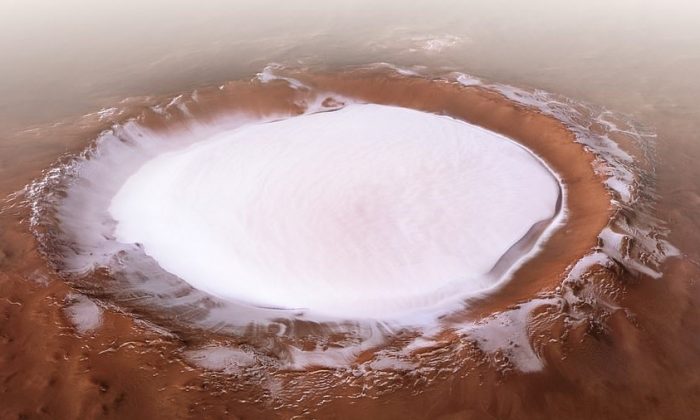 A powerful space camera operated by the European Space Agency has captured stunning images of a giant crater on Mars that is miles wide and filled with ice.

Eye-catching photographs of the crater, which measures 31 miles across, were published by the European Space Agency (ESA) on Thursday, Dec. 20, giving a new perspective on the red planet.

“This image shows what appears to be a large patch of fresh, untrodden snow—a dream for any lover of the holiday season,” the ESA said in a statement. “However, it’s a little too distant for a last-minute winter getaway: This feature, known as Korolev crater, is found on Mars.”

The space agency hails the timing of the images, snapped in detailed splendor by the Mars Express High Resolution Stereo Camera (HRSC), as an honor to the pioneering nature of the ESA’s Mars Express mission.

The spacecraft left Earth on June 2, 2003, and arrived on Mars six months later.

“The satellite fired its main engine and entered orbit around the Red Planet on Dec. 25,” the ESA said, “making this month the 15-year anniversary of the spacecraft’s orbit insertion and the beginning of its science program.”

The ESA added that the images “are an excellent celebration of such a milestone.”

Where Is the Crater?

It is positioned just south of Mars’s north pole and inside there’s a massive pool of frozen water.

The ice block is thought to be around 1.1 miles thick and it never thaws.

The snowy glacier in the Korolev crater has a volume of around 528 cubic miles of ice.

Science Alert notes that while that’s an impressive amount of frozen liquid, an unknown proportion of it is probably Mars dust.

How Did the Crater Get Its Name?

Sergei Korolev, the man who the crater is named after, is widely regarded as the father of Soviet space technology.

Korolev is universally credited as a seminal figure in—some argue even the patriarch of—the development of practical astronautics.

He was involved in launching the first human being into space, after first sending into orbit Laika, the space dog.

One of his most recognizable achievements is his work on the Sputnik program, which produced the first artificial satellite to orbit the globe.

Korolev’s perhaps best-known quote was, “The simpler a design, the better. Anyone can build something complicated.”

He was especially praised for his ability to bring together disparate design features into an integrated whole that simply worked.

The tech whiz was imprisoned in 1938 on false charges of being “a member of an anti-Soviet counter-revolutionary organization,” wrote author Asif A. Siddiqi in The Red Rockets’ Glare: Spaceflight and the Russian Imagination.

Korolev spent nearly six years in Soviet jails, including a stretch in a communist labor camp, or gulag.

He was later exonerated, freed, and went on to play a key role in the development of Cold War missiles.

His death in 1966 disrupted Soviet plans to beat the United States to put a man on the moon.