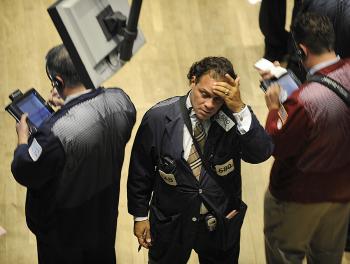 WASHINGTON—U.S. stocks rallied on Friday in abbreviated trading, led by the financial sector, as investors hope that the latest government bailout efforts would help stem an economic downturn that saw Wall Street overrun with bearish sentiment over the past several weeks.

The Dow Jones Industrial Average swung between positives and negatives all morning, but finished on the upswing, gaining 102 points, or 1.2 percent. The S&P 500 index increased around 1 percent, climbing for its fifth consecutive day. The S&P jumped over 143 points last week, or 19.1 percent, its biggest one-week advance in 34 years.

While the major indices ended the month on a positive streak, the Dow and S&P were both in the red since the beginning of November. So far this year, the S&P is down around 39 percent.

General Electric Co. gained 98 cents (6 percent) on Friday. Shares of the “Big Three” automakers also jumped considerably on Friday. Ford gained 25 percent, while shares of General Motors increased around 9 percent on rumors that the company may sell off certain brands including Saturn, Pontiac, and Saab.

The automakers face a Dec. 2 deadline to draw up a restructuring plan. Ford, GM, and Chrysler LLC plan to visit Washington this week to continue their negotiations for a federal aid package. A Dec. 5 Congressional hearing is scheduled for a new $25 billion auto-industry bailout package. Democrats are expected to strongly push for rescuing Detroit’s auto manufacturers.

Investors were further encouraged by the federal government announcing close to $800 billion in additional relief to help credit market liquidity, and President-elect Barack Obama’s announcement of his economic task team. Obama faces a challenging economic condition and sagging consumer sentiment, but promised that the nation’s economy is on top of his priority list as he prepares to take office in January 2009.

Energy industry was by far the largest burden on the S&P last Friday.

According to latest Department of Energy data, U.S. average gasoline prices declined to $1.89 per gallon as of Nov. 24. That is an 18-cent decline from the prior week and $1.20 less than the price at this time last year. Average U.S. gas prices fell below $2.00 per gallon for the first time since March 2005.

Surprisingly, the decline in gas prices have not translated into an increase in demand for fuel, as demand slipped 1.3 percent from the prior week.