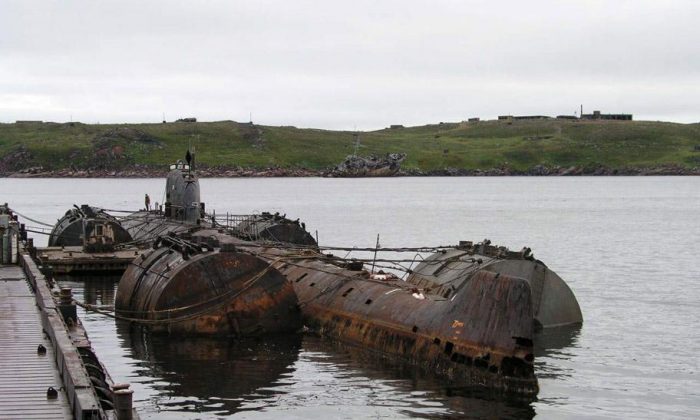 The Soviet Union had been dumping radioactive waste into the sea for decades by the time the communist bloc collapsed in 1991, even though other nations had abandoned the practice by the early 1970s.

“Most nuclear states had similar practices before the early 1970s,” including the U.S. Navy, said Dr. Eugene Miasnikov, the head of the Center for Arms Control, Energy and Environmental Studies, according to the Moscow Times.

In the early 1990s, a Russian report detailed how the Soviet Union frequently broke nuclear dumping rules and lied about it. And it was no trivial amount: the Soviets dumped twice the combined total of 12 other nuclear nations.

In 1972, the Soviet Union was party to the London Convention, an international agreement prohibiting nuclear dumping in the ocean, which was signed by 89 countries. The Soviets never honored the agreement.

The former communist bloc dumped some 2.5 million curies of radioactive waste, including 18 nuclear reactors from submarines, the New York Times reported, citing the Russian report, back in 1993. For comparison, all the other nuclear nations combined, from 1946 to 1982, dumped around 1.24 million curies.

A few years ago, the Russian government confirmed that two submarines, 14 nuclear reactors, 19 vessels containing radioactive waste, about 17,000 containers holding radioactive waste, and around 735 other pieces of radioactively contaminated heavy machinery were dumped in the ocean according to a report. Much of it was dumped into the Kara Sea, which the Times described as the “world’s largest known nuclear dump.”

The K-27 submarine, which was dumped into the Kara Sea in 1982 after trying for a decade to stabilize its reactors, is of particular concern. Described as a “nuclear time bomb,” the downed sub could potentially cause an “uncontrolled chain reaction,” releasing massive amounts of radiation and creating an underwater Chernobyl. Experts have urged the Russian government to extract it from the sea.

“The Soviet nuclear legacy may yet become a world catastrophe,” Struan Stevenson, the Conservative Euro-MP for Scotland, once warned. “It would be a grave error to think that this problem is in a far away country about which we know little and therefore can have no impact on us in the West. This is a man-made environmental problem of global significance,” he added.

Experts say the nuclear ships and submarines will eventually decay to the point of leaking out waste. Thomas Nilsen, an editor at the Barents Observer, says, “Counted in radioactivity, you could say that one single reactor compartment with spent nuclear fuel inside contains much more radioactivity than all the thousands of containers combined,” according to the Moscow Times.

For the time being, the radioactive waste the Soviets dumped remains safely sealed in their containers, according to Nilsen. However, he warned that “sooner or later, the radiation will leak out.”