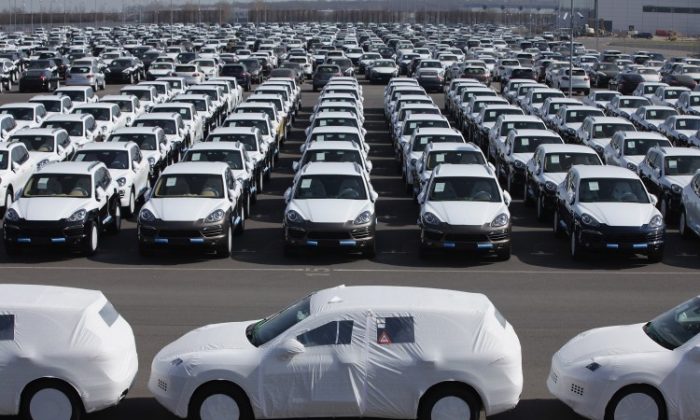 Sovereign Risk Back in Focus as Markets Slide

AMSTERDAM—The European Central Bank (ECB) left rates on hold at 1 percent at its meeting last week in Frankfurt. Despite some weaker economic data, “a moderate recovery is expected in the course of the year,” according to the central bank.

Riccardo Barbieri Hermitte, chief European economist for Mizuho, in a note to clients, doubts even that scenario as German industrial production remains weak and the industrial order book (planned purchases by businesses) shows no material increase.

“The weakness in Germany’s output indicators is probably due in part to firms’ efforts to reduce inventories,” Hermitte wrote. “Order books, while remaining well above their long-term average, are languishing way below the levels reached a year ago. With large eurozone countries such as Italy and Spain in recession and slow growth in other export markets, the softness in German orders is hardly surprising. Looking forward, the best one can expect for the coming months is a stabilization in manufacturing output and then a slow recovery in the second half of the year.”

Euro and Equities Close in the Red

Against the backdrop of both weak macroeconomic data and renewed concerns about sovereign credit risk, both the euro and the EURO STOXX equity index weakened significantly.

The Euro Stoxx lost 3.4 percent to close at 2,392 last Friday. The euro currency followed suit to lose 1.77 percent, closing at $1.31. Spain was again a drag on the stock market falling close to September 2011 lows.

Investment bank Goldman Sachs’s technical analyst, John Noyce, who predicted the fall of the euro in his note to clients last week, retains a cautious medium-term outlook. “Despite Tuesday/Wednesday’s fall in the spot market the discrepancy with the rate spread basket … has remained very wide as yields moved significantly further in the USD’s [American dollars] favor over that period. In simple overlay terms … the spread basket currently implies something closer to 1.2450 as ‘fair value’ for EUR-USD.”

The “rate spread basket” that Noyce mentions measures the difference in Treasury bond yields between Germany and the United States. If the yield of a basket of German bonds is significantly lower than the equivalent basket of U.S. yields, it means that people are buying relatively more German bonds to avoid risky assets in the euro area compared to risky assets in the United States. Normally the euro/American dollar exchange rate tracks the yield differential. Whenever there was a discrepancy in the recent past, the euro normally followed movement of the yield differential over the medium term.

Spain tried to sell bonds with a four- and eight-year maturity last Wednesday and the auction was widely considered to be a failure with only 2.6 billion euros ($3.40 billion) sold instead of the targeted 3.5 billion euros ($4.58 billion). Interest rates were much higher than the previous auction and banks tendered fewer bids in total.

The cost to insure Spanish debt with a credit default swap (CDS) immediately rose to 457 basis points (4.57 percent), meaning the cost to insure a Spanish bond of $1 million in principal would cost $45,700 per year. That rate is the highest since late November 2011. The 10-year benchmark government bond yield also rose to levels not seen since early January, reaching 5.68 percent in the process.

While Spain’s bad credit fundamentals and latent risks—rising debt to GDP levels, unofficial and unrecorded debt, high unemployment, under reversed banking system— are mostly known and understood by the market, there was no new announcement that triggered the failure in the bond auction. Instead, Hermitte from Mizuho thinks that the end of the ECB’s longer term refinancing operations had to do with the sudden deterioration.

“There are various reasons for the sharp widening in spreads, in our view. The first is that the latest money and credit data published by the ECB showed that eurozone banks in the three months to February bought a total of 114.9 billion euors worth of government bonds, with Spain (67.9billion euros) and Italy (54.2billion euros) being the net buyers while banks in other countries were net sellers. With the ECB unlikely to announce further operations of this kind (due also to growing internal opposition from the Bundesbank), markets have been left wondering who will be the net buyers of government bonds moving forward.”

Germany’s central bank, the Bundesbank, is part of the ECB’s clearing system and has indirect influence on ECB policy.

This week will be light on economic data for the eurozone, but trade figures for Germany and industrial production for Spain will be interesting to keep an eye on.

After last week’s gyrations in the sovereign bond market, this week’s debt issuances by the Netherlands, Austria, and Germany will be closely watched by traders for any changes in demand for highly rated sovereign debt.