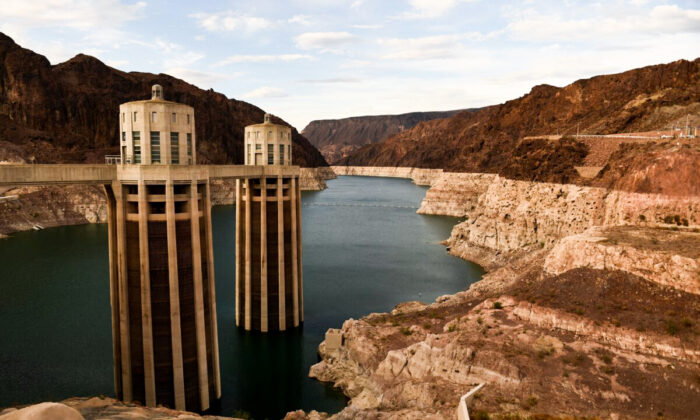 Intake towers for water to enter to generate electricity and provide hydroelectric power stand during low water levels due the western drought at the Hoover Dam on the Colorado River at the Nevada and Arizona state border on July 19, 2021. (Patrick Fallon/AFP via Getty Images)
Environment

US Southwest Suffering From Worst Drought in 1,200 Years

A megadrought that’s been scorching southwestern United States for the past two decades is now noted to be the worst in around 1,200 years, based on new research that analyzed tree ring patterns. Megadroughts refer to severely arid conditions that last for a couple of decades.

An initial study showed that the moisture deficit seen in the southwest between 2000 and 2018 was exceeded by a megadrought in the late 1500s. Researchers used tree ring patterns to determine soil moisture levels over long timespans. An update of the study, published in Nature magazine on Feb. 14, looked at drought between 2020 and 2021, and concluded that the 22-year period was the driest period since 800 CE, exceeding the megadrought of the 1500s.

“At 22-yr long, the turn-of-the-twenty-first-century drought is highly likely to continue through a 23rd year and match the duration of the shortest of the reconstructed megadroughts,” the report states. The previous driest 22 year period was 1571–1592.

According to the study, southwestern North America has been “unusually dry” since 2000 due to heat and low precipitation. Between 2000 and 2021, the mean water year precipitation in the region was 8.3 percent less than the 1950–1999 average, while the temperature was 0.91 degrees Celsius (1.64 degrees Fahrenheit) above average. Since 1901, no other 22-year period has been “as dry or as hot.”

Aridity has dominated the region since the turn of the century, as evidenced by the decline in two of the largest water reservoirs in North America, Lake Powell and Lake Mead, which are both on the Colorado River. During summer last year, the government had to place restrictions on the usage of water from the Colorado River as both reservoirs reached their lowest ever levels.

Aridity was “especially extreme and widespread” between summer 2020 and summer 2021: 68 percent of the western United States was classified as being under “extreme” or “exceptional drought” for the July-October 2021 period by the United States Drought Monitor (USDM).

The study blames human-triggered climate change for 42 percent of soil moisture anomalies in the region between 2000 and 2021.

Benjamin Cook, a co-author of the study and a climate scientist at NASA, said in an interview with Scientific American that there would still have been a drought even without the alleged climate change. However, it would have been “nowhere near the record-breaking event” happening right now.

“For the drought to end this year or next year, we’re gonna need one or two winters of pretty solid, above-average precipitation to kind of dig us out of the hole we’re in … And maybe it’ll happen.