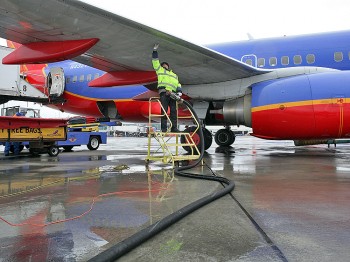 Southwest Airlines became the latest airline company to cut prices for seats during the fall.

The company said on Tuesday that it is going to sell some seats up to 450 miles at $40 each way for its 40th anniversary.

This means one can fly from Los Angeles to Las Vegas for $40 or from Washington DC to New York City for the same amount.

The fares are available for purchase through 11:59 p.m. on Thursday for travel beginning on August 23 through November 16. The seats are “limited” and might not be available for every flight between then.

Last week, AirTran and JetBlue launched their summer sales. This season, airliners are expecting the usual increase in travelers.

Tom Parsons of Bestfares.com says the Southwest deal is one of the best he’s seen.

"This is the first time that I can remember in my 30 years of tracking airfares that I have seen airfares from over 100 U.S. cities as low as $40 one-way,” he said, according to USA Today.