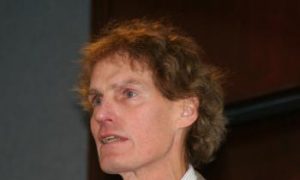 Southern Style: Immigration and the Ostrich

Everybody loved Mr. Delgado. He was a courier for the public library for 20 years, at least. He was the type of man people call a teddy bear, big and kind.

You would hear his heavily accented, deep voice calling “Hello hello, good morning!” as he entered the library pushing his hand truck loaded with crates of books. An Atlanta Braves hat always adorned his curls—he was a big baseball fan, so during the baseball season we would discuss last night’s plays.

Mr. Delgado went out on medical leave. We got stern and repeated instructions not to pack the crates to the brim. They must not weigh more than 25 pounds, said the memos. Confidentiality rules prevented anyone from saying this was to protect Mr. Delgado. But we knew.

He came back, a little thinner, a little grayer, still cheerful and warm.

Mr. Delgado was a naturalized citizen. He was a permanent employee of the government. He retired with a pension and health insurance, after a long stint of honest service to his community.

Miss, uh, I can’t remember her name, was a subcontractor. She led the crew who cleaned the library at night. Warm and cheerful, she gave me her personal cell phone number and asked me to call her if anything was not right. She left me notes in a legible, pretty hand. Her crew followed the cleaning checklist, a rarity.

It was a night job on top of her day job. She passionately wanted to establish her own company.

It did not last. I never knew why. The contractors and subcontractors generally came and went.

She was just as lovable and hard working and Latino as Mr. Delgado, and possibly not a citizen. I am not accusing my government of employing illegal aliens as subcontractors, am I? Mostly we don’t want to know.

Miss Nameless surely cost the county less than Mr. Delgado did. Yet, as a worker, she was disposable.

In Georgia, the Legislature has just passed S.B. 1070 modeled on Arizona’s controversial immigration law. It mandates that governments verify that their contractors and subcontractors are in the country legally. At the same time, the U.S. Equal Employment Opportunity Commission (EEOC) just filed three lawsuits against labor brokers and employers who used immigrant workers. Welders and agricultural workers in multiple states were basically tricked into enslavement, it alleges.

“The EEOC is committed to the protection of all workers. The lawsuits we have filed today seek to remedy systemic discriminatory practices against a particularly vulnerable class of workers,” said P. David Lopez, general counsel of the EEOC in a statement. “When necessary, the EEOC will file such cases to protect victims of discrimination and ensure all workplaces comply with the law."

I understand the rage people are expressing when they say America is not securing its borders, that immigrants are taking our jobs. But the rage is directed at the wrong target.

Some businesses and even some government agencies benefit from using a worker who can be paid far less than other workers. That worker is the “illegal.” The long, long resistance to comprehensive federal immigration reform comes from the employers who are willing to increase their profits by exploiting this source of workers.

Righteous anger should target the global problem of putting money above people, and above ethics. We need to know. We need not be ostriches about it.