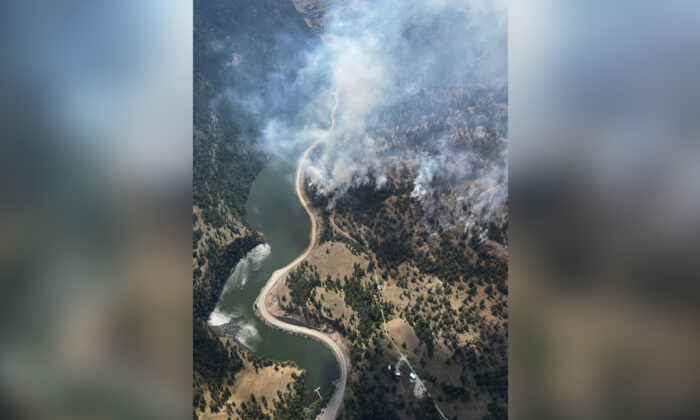 Smoke from a wildfire is visible along Highway 3A at the north end of Yellow Lake in British Columbia in an Aug.3, 2022 handout photo. (The Canadian Press/HO-BC Wildfire Service)
Canada

Cooler weather has given wildfire crews a modest breather as they battle an increasing number of fires around British Columbia.

Information from the BC Wildfire Service shows little overnight growth on most of the six fires of note in the province that are either highly visible or a potential threat to homes and properties.

The blaze southwest of Penticton is the exception, growing to just over 42 square kilometres Wednesday, up from 28 square kilometres, as stiff winds forced flames downhill toward the community of Olalla.

Fire officials expect to issue a new perimeter map after controlled burns along one flank of the blaze nearest Highway 3A on Wednesday dropped debris onto the route between Keremeos and Kaleden, briefly closing the road.

Nearly 300 firefighters are assigned to the fire and the wildfire service says mop-up from the controlled burns and Wednesday night’s fire activity is continuing as temperatures in the southern Okanagan remain cool but are set to climb to the low 30s this weekend.

Campfire bans are also set to take effect in the Kamloops, Southeast and most of the Coastal fire centres as the wildfire service reports a total of 530 blazes in B.C. since the start of the fire season—151 of them in the last seven days.