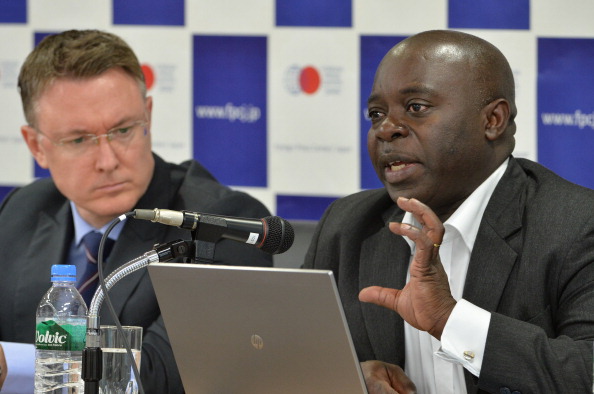 Justice Tettey (R), Chief of the Laboratory and Scientific Section, United Nations Office on Drugs and Crime (UNODC), speaks as Jeremy Douglas (L) of UNODC's Regional Office for Southeast Asia and the Pacific looks on during a press conference on May 20, 2014. Douglass has pointed out that Guangdong Province has become a center for the global supply of the synthetic drug meth. (Kazuhiro Nogi/AFP/Getty Images).
China

The global methamphetamine supply is being made in one small district in Guangdong Province in southern China, according to the regime mouthpiece Xinhua News Agency. Over 20 percent of the 14,000 villagers are involved in the manufacturing of the stimulant, and the local village Party chief and the deputy are leading the way in making the drug.

Lufeng District operates like a small fortress where people stand guard with AK-47s and handmade grenades, trying to protect their family business, should local authorities try to enter for an inspection.
.
According to the United Nations drug official Jeremy Douglas, the local, corrupt pharmaceutical companies provide precursors for making the drug.

Lufeng District operates like a small fortress where people stand guard with AK-47s and handmade grenades.

The same precursors can be used by the pharmaceutical companies to make cold or flu medicines.

“To operate a lab like this, you need a lot of chemicals, which are legitimate, regulated chemicals from the pharmaceutical industry,” Douglas said, according to South China Morning Post.

Douglas’s remarks came after over 2.4 tons of methamphetamine were seized in Lufeng, along with four trucks used for transporting drugs, 1.51 million yuan in cash (about US$241,488), 2 handguns and 11 bullets. Police from Shanghai worked with local police in Guangdong Province to make the seizures in December 2014.

At a press conference, He Gongping, the deputy chief of Guangdong Provincial Public Security, said that seizing over 21,941 kilograms of different drugs in 2014 established Guangdong as the province facing the most dire drug problem in China, reported Xinhua.