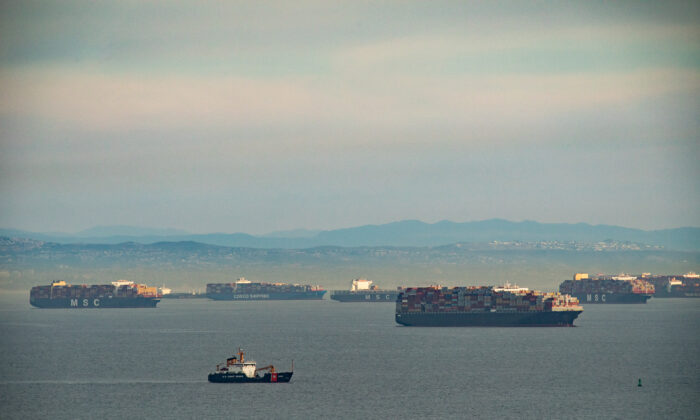 Ships await to be offloaded in the ports of Los Angeles and Long Beach on Jan. 12, 2021. (John Fredricks/The Epoch Times)
Southern California

HUNTINGTON BEACH, Calif.—The underwater pipeline that spilled thousands of gallons of oil off the coast of Huntington Beach may have been ruptured as much as a year ago, and multiple ship anchors may have struck the line in that time, a U.S. Coast Guard official said on Oct. 8.

Capt. Jason Neubauer, the Coast Guard’s lead investigator, said the crack in the pipeline could have developed at any point over the past year and expanded over time, so it remains unclear when oil actually began leaking.

Neubauer indicated that underwater video of the damaged pipeline shows “marine growth” around the 13-inch crack in the pipeline that was left exposed when its concrete casing was ripped away, likely by the strike of a ship’s anchor that hooked the line and dragged it 105 feet out of place. Investigators were analyzing the maturity of the vegetation to give them a clue as to when the pipeline was initially struck and lost its protective concrete casing.

The presence of the marine vegetation on the exposed pipe “has refocused the … timeframe of our investigation to at least several months to a year ago,” Neubauer said.

He said a routine inspection of the pipeline conducted by its owner, Amplify Energy, in October of last year showed no damage.

“We’re going to be looking at every vessel movement over that pipeline and every close encroachment” over the past year, Neubauer told reporters during an Oct. 8 press conference.

That data includes satellite images, radio broadcasts, and the traffic of vessels. Investigators were also looking into the possibility that a winter storm from Jan. 24 to 25 may have contributed to the positioning of ships’ anchors in the area.

While more than 900 people are performing response operations for the oil spill across Orange County beaches, a call for volunteers to assist with the cleanup has been issued.

According to Orange County Supervisor Katrina Foley, 2,000 volunteers have already signed up to help. The county hopes to increase the number of volunteers in their community as the city opened up the cleanup efforts to the public earlier this week. Volunteers who sign up to assist in the effort will receive four hours of training revolving around the handling of hazardous materials, Foley wrote on Twitter.

“In Orange County, the public can expect to see Shoreline Cleanup Assessment Teams and work crews equipped in protective gear, monitoring, inspecting, and cleaning the beaches to ensure that appropriate cleanup actions are taken,” Southern California Spill Response said in an Oct. 8 update.

Additional cleanup crews arrived in Newport Beach on Oct. 5 to remove tar and oil from the beachfront.

As of that day, in Newport Beach alone, West Newport was reported to have the highest concentrations of oil following Corona del Mar and the Wedge.

The oil spill was originally estimated to have released roughly 144,000 gallons, but in a recent update, authorities speculate the amount could be closer to 30,000.

“There’s speculation of about 30,000 gallons, but that’s not been confirmed,” Orange County Supervisor Lisa Bartlett said. “But that would make more sense, adding the amount of wildlife so far affected by the spill does not reflect a larger oil spill.”

The oil spill off the coast of Huntington Beach was reported to the U.S. Coast Guard around 9 a.m. on Oct. 2. However, questions arose about whether the company responsible for the spill, Amplify Energy, knew about the situation hours before the initial report.

The U.S. Department of Transportation’s Pipeline and Hazardous Materials Safety Administration’s Office of Pipeline Safety released an order on Oct. 5 stating that workers in the Amplify Energy control room “received a low-pressure alarm on the San Pedro Bay Pipeline, indicating a possible failure around 2:30 a.m. on Saturday,” nearly four hours before the pipeline was shut down.

Amplify Energy CEO Martyn Willsher stated that the company was working with investigators to provide transparency regarding the timeline of the incident.

“We did not take any additional time [after discovering the leak]; we automatically instituted our incident recovery plan, and people were notified very, very quickly,” Willsher said during an Oct. 6 press conference.

Huntington Beach issued an ocean and wetland water quality test at 30 sites. Air monitoring surveys and air sampling are further being conducted along 12 sites on the coastline. Results of the findings were pending as of Oct. 8.

“As the oil response teams continue to monitor, inspect, and clean the beaches to ensure that appropriate cleanup actions are taken, and in advance of water analysis from the Unified Command, our original health advisory continues to remain in place,” Orange County Health Officer Clayton Chau said in a statement.

“We ask that our residents and visitors continue to avoid the ocean water and oiled areas of our beaches to limit the risk of contaminants being absorbed through the skin, inhalation, and ingestion until further notice.”

Chau further urged residents and visitors to refrain from participating in recreational activities on the coastline as the oil spill can linger even when not visible.

The city of Laguna Beach further announced on Oct. 8 that the sand would be reopened to the public as the shoreline and oceanfront continue to remain closed.

The cause of the oil spill is still under investigation, but speculation that an anchor may be the culprit is being considered.