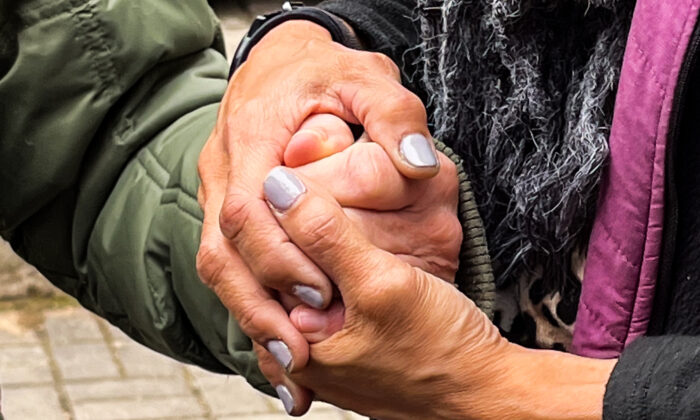 LAKE FOREST, Calif.—Just two weeks ago, Tali Miles was walking among thousands of Ukrainian refugees sheltering within a crowded expo center in the city of Warsaw, Poland.

“Your initial feeling is just pain, because war is so evil,” she told The Epoch Times while fighting back tears.

“And you see who is suffering and who the victims are, and that’s just what you feel. You get angry about the situation.”

Miles, from Trabuco Canyon, California, and six others made up an assessment team for Peace Relief—a ministry of Saddleback Church that sends volunteers all over the world to serve those facing the challenges of natural disasters and war.

As the church is committed to serving Ukrainians displaced throughout Europe, her team was tasked with identifying the physiological, mental, emotional, and spiritual needs of the refugees and preparing Saddleback’s future teams for the long-term task of serving.

“When I first entered that expo center, I almost immediately thought of Matthew 9:36: ‘When He [Jesus] saw the crowds, he was moved with compassion to the depths of his being, for they were bewildered and dejected, like sheep without a shepherd,’”  Miles quoted.

“The koine Greek word in verse is splangchnistheis. It is formed from the word splangchna, which describes the compassion which moves a man to the deepest depths of his being.”

Walking further into the expo center, which can hold up to 5,000 refugees, Miles and her team noticed Polish volunteers working around the clock in all different aspects of humanitarian relief, including cooking, medical treatment, day care, clothing donations, and even creating an area for pet supplies for the animals accompanying refugees that were escaping into Poland.

“It was so hopeful and encouraging to see the way that the people of Poland have shown up volunteering their time and money and are even quitting their jobs to help the refugees in the expo center,” Miles said.

“But you have to understand, with that amount of people, there is no privacy whatsoever as the refugees are sleeping on cots less than a foot apart which are divided into sections for families and men and women.

“This is a transitional stage for refugees as they use the resources provided to figure out what’s next for them.”

Being around refugees of war is nothing new for Miles, who has made herself available to serve those in need from Sri Lanka to Rwanda.

But as for being in the presence of such victims, the experience never gets any easier.

“I’ve seen the effects of war up close, but seeing like the injuries and the losses will always be hard to process,” Miles said.

“In Poland, we were often seeing people emaciated that were walking with limps and had facial scarring sustained during the war.”

In one instance, Miles described seeing a man dragging his feet with bruises all over his face.

“He just kind of walked in front of us, and you could see the agony he was feeling,” Miles said. “You could almost just see the pain he was feeling.”

In other instances, Miles has encountered many refugees trying to process the decisions they made to leave Ukraine and also leave loved ones behind.

“Do I stay in Poland, or do I go back to Ukraine to be with my husband and son?” one woman said.

“My elderly mother didn’t leave Ukraine with me. She would rather die in her home,” another refugee said.

As most Ukrainian men between the ages of 18 and 60 are banned from leaving the war-torn nation in case they are required to serve in the Ukrainian Armed Forces or Territorial Defense Forces, the majority of women and children escaping Ukraine are leaving someone behind.

“I think there’s that saying, ‘Oh, kids are resilient,’ which I think is true to an extent, but this trauma is going to stick with them for the rest of their lives,” Miles said.

“Kids are losing their dads, and their families are going to be permanently changed.”

All Hands on Deck

Shortly before Miles and her team arrived in Poland, Saddleback’s Pastor Mike Constantz of the church’s Global Peace Plan, was on the ground spearheading the church’s relief efforts in Poland. Like Miles, he was encouraged by the efforts of the Polish people he witnessed over the course of his assessment.

“What I first saw was the amazing love the Polish Christians had for the Ukrainian refugees flooding into their country,” Constantz, who is from Dana Point, California, told The Epoch Times.

“The church members were opening their homes to allow in families they didn’t know.”

As of May 8, the United Nations reported that more than 5.8 million people had left Ukraine.

Of those who have left the war-torn nation, neighboring Poland has taken in more than 3.2 million thus far.

“The challenge we faced was knowing that Poland will ultimately need to handle the hundreds of thousands of refugees that will settle in Poland and need to find housing and jobs,” Constantz said.

“Our church goes to serve the onsite churches knowing that they will be the long-term workers serving these hurting and vulnerable refugees.”

Having served all over the world, the refugees escaping Ukraine and crossing into Poland reminded him of the horrors he witnessed so often in people displaced by war.

“[They’re] so confused and absolutely helplessly dependent on others to guide, translate, and bring them to a relocation center—with thousands who had all been traumatized by the absolute evil of war,” Constantz said.

“[You could see] the hopelessness on their faces, exhausted by days of traveling with little food or water, carrying only a few prized possessions.”

A recent United Nations report stated that at least 3,153 civilians have been verified as killed since the Russian invasion began.

Most of these deaths have been with the use of explosive weapons with an area of wide impact that includes shelling and rocket launch systems.

As Saddleback Church moves forward in fulfilling its plan to partner with Polish churches in backing their refugee relief efforts for the long term, it’s easy for Americans to not know where to begin regarding helping refugees.

“First, don’t let the news cycle, which will turn to other things, cause you to stop caring and responding. Keep up to date on the war on Ukraine and talk to others about it,” Constantz said.

“Obviously you can pray, give, and find out if any Ukrainian refugees are coming into your community or state.”