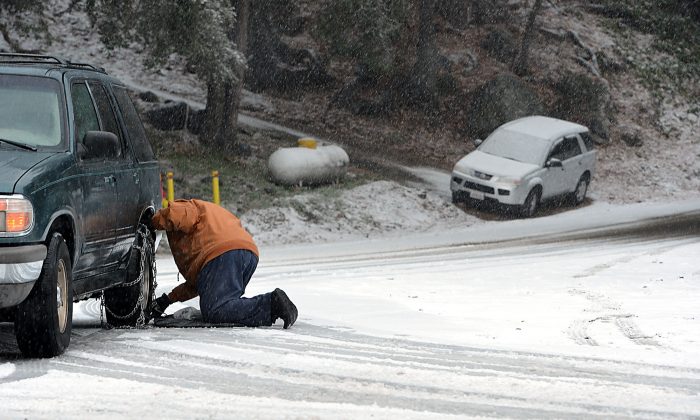 Jerry Walter, of Forest Falls, Calif., puts chains of his vehicle before heading to his home further up in the Southern California mountain community Tuesday Dec. 30, 2014. A very cold low-pressure system followed by an arctic airmass was dropping through the state, bringing the possibility of very low-elevation snow and blustery winds Tuesday night and early Wednesday and then a big chill through Thursday morning according to the National Weather Service. (AP Photo/The Sun, Rick Sforza)
US

A winter storm has dropped snow at startlingly low elevations across Southern California on Wednesday, stranding hundreds of motorists on steep mountain roads.

About 300 cars were stuck Highways 330 and 18 in Big Bear as snow began piling up from the storm, California Highway Patrol Officer Marcelo Llerena told the Los Angeles Times. Around 175 vehicles were eventually towed and will be picked up later by their owners.

About 130 people were also stuck along Highway 138, but firefighters were able to rescue all of them.

The National Weather Service initially forecast snow at elevations as low as 2,000 feet, but the service later said that snow had dropped on areas as low as 1,000 feet, with accumulations east and southeast of Los Angeles in communities such as Temecula, Murrieta, Wildomar, and Temescal Valley.

Many residents of the suburbs north of San Diego have seen snow before but only on wintertime trips to the mountains to go skiing or sledding — not at their front door.

In Temecula, people snapped photos of the snow-covered lawn outside City Hall and kids threw snowballs.

City Manager Aaron Adams said his 12- and 14-year-old daughters were sledding down the hill outside his home on bodyboards usually reserved for the beach or pool. He said he’s never seen as much snow — half a foot in some places — in the two decades he’s lived there.

“You’d think you woke up in Tahoe or something,” Adams said. “Our Old Town looks like a ski town, it looks like something out of Colorado.”

The storm also packed strong gusts that toppled trees throughout California. A tree fell into a home early Wednesday in Redding, killing a woman and injuring a child and a man. It’s the third death from falling trees since Tuesday.

Two people died when a tree toppled onto a car and another on a home in separate incidents as winds topped 60 mph in the Paradise ridge area of Butte County in the northern Sierra foothills, the Oroville Mercury-Register reported.

Meteorologist Greg Martin said that strong winds, which have prompted multiple wind advisories, are expected to last into the afternoon, but should drop off in the late afternoon. The snow and light rain are expected to end late Wednesday, although cold temperatures will likely remain.

“When things clear out, it should get colder,” Martin said.

To some of you snow is no big deal but being a flatlander in Southern California its rare pic.twitter.com/vMB7Akl7T5

One sight I never thought I’d see: My Southern California backyard blanketed with snow (cacti and all). pic.twitter.com/s6T4nOO5Xt

Snow in the palm trees on a wintry New Year’s Eve for Southern California @latimes pic.twitter.com/7xu0hHF6uQ

Only in California do you get a cool sunset one day and snow the next day pic.twitter.com/dzpg8hPrkY

Snow in California! Not the mountains or the foot hills. We’re at 900-1000ft elevation. Most snow in Temecula ever?