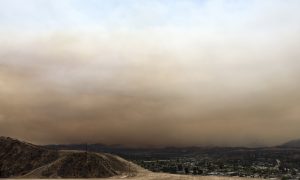 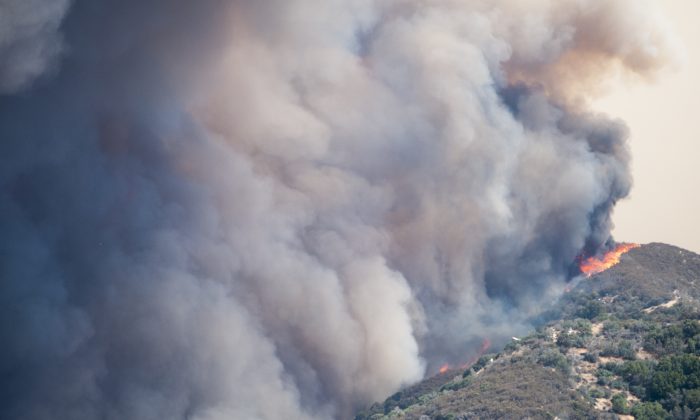 A wildfire burns over a ridge towards Summit Valley, Calif. on Aug. 7. (James Quigg/The Daily Press via AP)
Southern California

CRESTLINE, Calif.—A wildfire in the San Bernardino National Forest about 55 miles east of Los Angeles tripled in size to approximately seven square miles on Sunday night. Smoke from the fire is casting a hazy pall in Las Vegas, more than 200 miles away.

The blaze in the San Bernardino Mountains east of Silverwood Lake and south of the high desert city of Hesperia burned from 1,500 acres on Sunday to 4,500 acres early Monday. Containment is estimated at just 5 percent.

Some 400 firefighters are working the blaze and more have been ordered.

The fire erupted shortly after noon Sunday, grew to more than two square mile in mere hours, and forced the evacuation of homes in the sparsely populated Summit Valley area east of the dam. Sections of two state highways were closed because of the fire. The cause is under investigation.

Officials say 20 mph winds pushed the huge plume of smoke north into the Mojave Desert and into Nevada. The air quality may reach unhealthy levels in the areas affected by the smoke. Sensitive groups include young children, senior citizens people and with respiratory problems and cardiac disease.

Among other fires in California, the 18-day-old blaze near Big Sur has burned nearly 90 square miles and is 45 percent contained.

More than 5,000 firefighters are on the lines of the fire, which was ignited by an illegal campfire and has destroyed 57 homes and damaged three others.

Officials said that overnight winds pushed flames higher in the southwest section of the Big Sur blaze, and they expect to be fighting the fire until the end of the month.