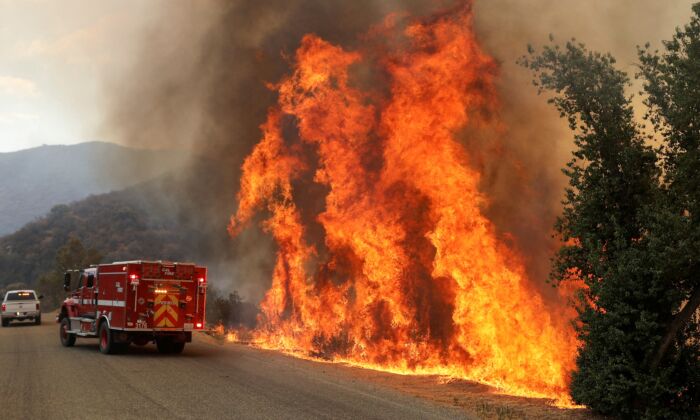 Flames grow next to a fire engine as the Fairview Fire burns near Hemet, Calif., on Sept. 7, 2022. (David Swanson/Reuters)
Southern California

After eight days of the Fairview Fire sweeping through Southern California’s desert communities, firefighters said the fire is now at 53 percent containment as of the afternoon of Sept. 12, with more than 28,300 acres burned. More than 1,100 structures were threatened, 36 were destroyed, and 6 were damaged.

The fire—which broke out on Labor Day—began at Fairview Avenue and Bautista Canyon Road near Hemet, California. The cause of the fire is still being investigated.

Southern California Edison—the main electricity supplier for the region—claimed in a filing Sept. 6 that “circuit activity [occurred] close in time to the reported time of the fire”—indicating a possibility that the fire started from the utility’s equipment.

Two first responder injuries, two civilian fatalities, and one minor injury have been reported, according to the fire department.

“Fire activity has been greatly reduced due to the moisture from [the storm]. Deep-seated heat is still present in the dense old-growth brush fields, and stump holes [and] fine flashy fuels will not sustain fire or ignition,” fire officials from the Riverside County Fire Department said on Sept. 10 at a press briefing.

Some residents preparing for evacuation orders considered the rain to be a godsend.

“My sister and I had both cars packed and dogs waiting for the evacuation. [We are] thanking God for the rain that saved all of us,” one resident, Maureen Carroll, wrote on Facebook Sept. 12.

Rainfall over the weekend provided “excellent humidity recoveries on the fire,” permitting some of the mandatory evacuation orders to be downgraded to voluntary, but residents were “highly encouraged to remain alert during this dynamic incident,” officials said.

On Sept. 11 by 4 p.m., evacuation orders covered several areas including east and west of Fairview, north and south of Highway 74, south of San Jacinto Riverbed, west of Wilson Way, north of Stetson, and east of Soboba Street. The road closure on Highway 74 was also lifted.

Evacuation centers are set up at Tahquitz High School and the Temecula Community Center.

Hemet Unified School District students also returned to classes Sept. 12 after a week of cancellations due to the weather conditions. The San Bernardino National Forest was also closed due to the fire.

The Riverside County Animal Shelter waived fees under the county emergency order for taking care of pets left behind because of the fire. The shelter also cared for large farm animals like horses and cattle at the Perris Fairgrounds. Small animals were admitted to a shelter in San Jacinto, north of Hemet.

As of Monday, Sept. 12, more than 2,200 firefighters remained on the frontlines of the fire, with the county fire department, Hemet Fire Department, San Bernardino National Forest, and the Riverside County Sheriff’s Department all working in tandem.