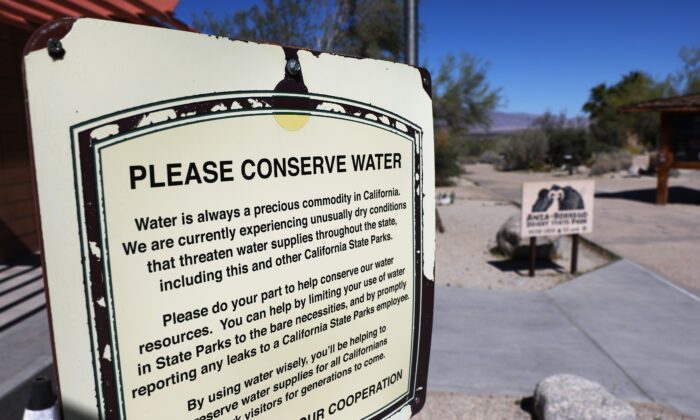 Southern California’s water supplier on Tuesday asked about 6 million people to limit their outdoor watering to one day a week amid a water shortage emergency owing to the ongoing drought.

The Metropolitan Water District of Southern California (MWD), the largest supplier of treated water in the United States, asked residents in parts of Los Angeles, Ventura, and San Bernardino counties to cut their outdoor watering.

“We don’t have enough water supplies right now to meet normal demand. The water is not there,” MWD spokeswoman Rebecca Kimitch said. “This is unprecedented territory. We’ve never done anything like this before.”

According to the MWD, the affected regions face an “emergency because of reliance on severely limited” supplies from Northern California.

“The past three years are projected to be the driest in our state’s history, leading to drought conditions unlike anything we’ve experienced before,” it noted.

The MWD uses water from the Colorado River and the State Water Project to supply 26 public water agencies that provide water to 19 million people, or 40 percent of the state’s population.

But record dry conditions have strained the system, lowering reservoir levels, and the State Water Project—which gets its water from the Sacramento-San Joaquin River Delta—has estimated it will only be able to deliver about 5 percent of its usual allocation this year.

January, February, and March of this year were the driest three months in recorded state history in terms of rainfall and snowfall, Kimitch said.

The MWD said that the 2020 and 2021 water years had the least rainfall on record for two consecutive years. In addition, Lake Oroville, the State Water Project’s main reservoir, reached its lowest point last year since being filled in the 1970s.

The measure was approved by the district’s board on Tuesday, but it is expected to take effect on June 1. Officials are expected to elaborate on policy details on Wednesday morning.

The MWD’s client water agencies must implement either the one-day-a-week outdoor use restriction or find other ways of making equivalent reductions in water demand, Kimitch said.

Although the water agencies support the water conservation move, it remains to be seen whether the public will do it, Kimitch said.

The MWD will monitor water use and if the restrictions don’t work, it could order an all-out ban on outdoor watering as soon as September, she said.