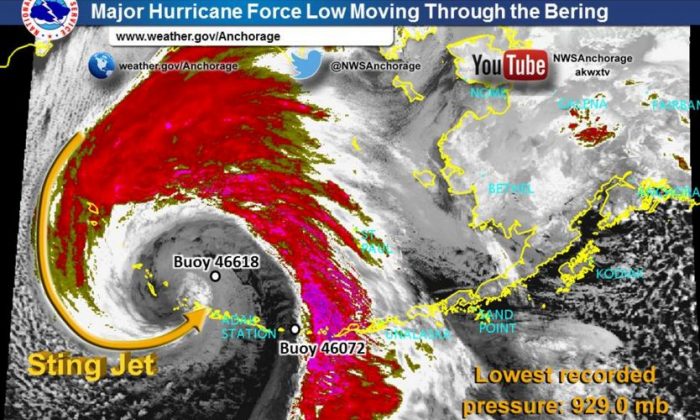 A huge storm is slamming Alaska on Sunday, with winds as high as 120 mph. If it were tropical, it would be considered a Category 3 hurricane.

A blizzard warning was issued for most of Southern Alaska, per the National Weather Service.

“A major storm is moving through the Bering Sea. This infrared image was captured by a polar-orbiting satellite Saturday afternoon. Here are the “stats” on this system as of 4am Sunday morning. The sting jet wrapping into the center of the low is a localized area of the most intense winds. It was responsible for a 122 mph gust reported at Adak Island. To give some perspective, this is equivalent to a category 3 hurricane. The highest seas were recorded on buoy 46072 and the lowest pressure was recorded by buoy 46618. This will remain a very strong storm through Sunday as it tracks north into the Bering Strait,” a bulletin reads.

A major storm is moving through the Bering Sea. This infrared image was captured by a polar-orbiting satellite Saturday…

Posted by US National Weather Service Alaska on Sunday, December 13, 2015