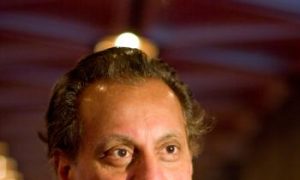 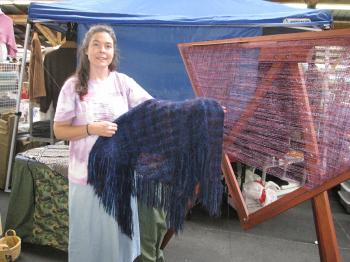 HATTER: Michelle Elliot from California, now living locally in West Sand Lake, N.Y. was modeling one of her 'failures.' Only from a recount of its history would you know that she had cut down a nonconforming derby. She had a variety of gray derbies and women's hats in lovely colors. (Louise McCoy/The Epoch Times)
US

By Louise McCoy
biggersmaller
Print
It was a sunny fall day. The colors were starting their recital of brilliant reds, oranges, and yellows, flowing down from the hilltops into the green valleys, each tree playing its part.

I hadn’t been weaving, dying, or spinning for years, but I found these activities still very much alive here at the Southern Adirondack Fiber Festival on the Washington County Fairgrounds in New York.

In the large barns rainbow-colored hanks of wool, tools, art, crafts, and animals were displayed, demonstrated, or caged in booths while cheerful venders were more than willing to speak about their profession, teach, and have their picture taken.

Not only was this amateur photographers’ heaven, but also the very contrast to modern living took you to a different world. The first day an elderly barbershop quartet wandered through the grounds harmoniously singing songs from the 1960s to the ladies in the booths.

For children and adults there were plenty of hands-on activities. Ladies were dancing to the Kangarooster duo’s music coming from outside as they felted. Felting appears to be not only a craft but also a type of exercise. In addition there were opportunities to spin, sculpt felt, hook rugs, and watch lots of demos.

The first booth we visited was the Cozy Rabbit Farm. Sandy Anderson has 75 angora rabbits in South Jersey. This was a touchy-feely experience as there were hanks of handspun, hats, mittens, and even unspun rabbit wool—the ultimate in softness. Rabbits need to be plucked every few weeks, so between rabbit care, plucking, spinning, and knitting, she was probably on a two-day vacation at the festival. We bought a skein of handspun rabbit for a hat.

Spinners were everywhere. Spinning has a nice hum when going well. The rhythm of treadling synchronized with the speed of pulling out the fiber, watching it twist, and letting it feed onto a bobbin puts the spinner and onlooker into an altered state. One lady listens to CD books while spinning.

The Vermont spinning wheel manufacturer, David Paul of The Merlin Tree was there with his diminutive little wheels called Hitchhikers. They can fit in a large grocery bag, which you can buy with the wheel. Hitchhikers come with one or two treadles.

When asked whether the spinning was therapeutic, David’s wife Kathy told us of a very bad pain she had in her hip, which every doctor could only diagnose as a mental problem. Finally she went to an osteopath. He saw her hips were out of line and asked if she engaged in any activity using just one side. As soon as she got an adjustment, the pain went away and stayed away because her husband put another treadle on the wheel, so she could use both feet while spinning.

Every couple of hours there was a sheep-shearing demonstration with an educational commentary by professional shearer, Jim McRae. Everyone got a handful of wool to experience the crimp and the staple (length of strand), two criteria used for judging a fleece.

Debi St. Jacques and her daughter brought their two highly trained Australian sheepdogs and a herd of trained male ducks to demonstrate the teamwork of herding. The ducks are not scared and obligingly run where trainer and dog indicate. Watching this was a treat.

Sheep, alpacas, llamas, and bunnies were also present, pettable, and even for sale.

Their owners shared stories and generously answered all questions.

For instance, Cassandra Fusco of Red Creek Farms in Rome, N.Y., said that when alpacas sense danger, they bunch together and make a high squeaky noise until they have identified what the danger is. Then they stop. If it is a coyote, a coyote won’t kill anything he can’t pull under a fence. Apparently alpacas know this.

There weren’t great crowds, which meant that everyone got all the individual attention they could ever ask for from the venders. There was a very relaxed, informal feeling. More spinners and knitters are needed!

If you missed this festival and are interested in this topic, future events in the Northeast are: Oct. 2 and 3, the Vermont Sheep and Wool Festival in Tunbridge, Vt., Vermontsheep.org/festival.html

The Inaugural Fiber Festival of New England is in West Springfield, Mass., Nov. 6 and 7, Thebige.com/ese/ESEEvents/Fiber_Festival.asp

For fiber festivals in other parts of the country see: Thistlecovefarm.com/fiber.html