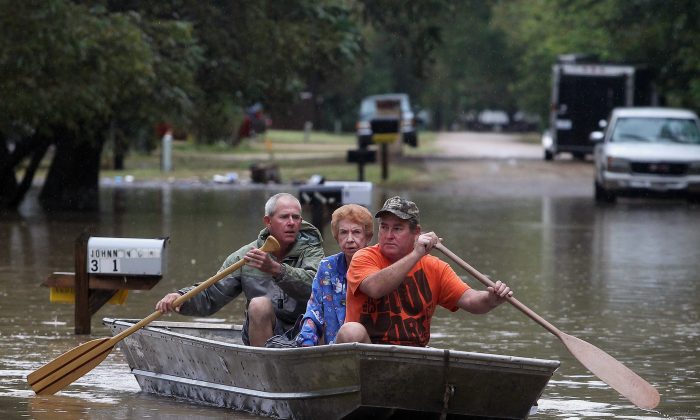 J.B. Neckar, right, and his brother Johnny Neckar, left, paddle their mother Gelene Neckar, center, from her flooded home near Downsville, Texas, Saturday, Oct. 24, 2015. Heavy rains have forced parts of the Brazos River out of its banks and endangering homes located in the small community just outside of Waco, Texas, according to the Waco Tribune Herald. (Jerry Larson/Waco Tribune Herald, via AP) MANDATORY CREDIT
US

Southeast Texas to Get Heavy Rain; People Told to Be Patient

DALLAS— Heavy rains were expected to fall in Southeast Texas through midday Sunday as the remnants of Hurricane Patricia combined with a powerful storm system that has flooded roads in the state and caused a freight train to derail.

Houston Mayor Annise Parker said people should be “prepared to be patient.”

“There will be localized flooding in Houston, primarily street flooding,” she said Saturday.

Brian Kyle, lead meteorologist with the National Weather Service in Houston, said forecasters expected Saturday’s rains in Southeast Texas to intensify overnight. He said most of the heavy rainfall would occur overnight to noon on Sunday, with amounts ranging from a couple of inches to up to 1 foot offshore.

Galveston County Judge Mark Henry issued a voluntary evacuation Saturday for Bolivar Peninsula, just northeast of Galveston Island, after forecasters predicted the area would get 8 to 12 inches of rain and tides 4 to 5 feet high.

County spokeswoman Brittany Rainville said officials don’t think many people chose to evacuate. The roughly 4,000 people who live on the peninsula are used to flooding and usually stay, she said.

Bryan Brawner, who owns a charter company on the peninsula that takes people fishing in the Galveston Bay, said: “Most people are just going to have their groceries and watch TV and watch it rain.”

“People just know not to get out and drive anywhere,” he added.

Carole Hamadey, who owns a bed-and-breakfast there, also planned to stay, along with about seven guests.

“I feel comfortable. I’m about 16 feet off the ground. The guests seem to feel OK, too,” she said, adding that she’d ridden out Hurricane Ike there in 2008.

Meanwhile, the storm system that had been dumping rain on parts of Texas since Friday caused flooding that blocked several major roadways and caused the derailment of a train.

A Union Pacific freight train derailed before dawn Saturday near Corsicana, about 50 miles south of Dallas, because a creek overflowed and washed away the tracks, said Jeff DeGraff, a railroad spokesman. The two crew members swam to safety and nobody was hurt, he said.

One locomotive and several rail cars loaded with gravel went into the water and were partly submerged, DeGraff said.

In San Antonio, a man walking his dog before dawn Saturday was swept into a flooded drainage ditch and disappeared, fire officials said. The dog is safe.

Authorities on Saturday morning reopened a section of Interstate 45 near Corsicana that was closed due to flooding, backing up traffic for 12 miles.

Patricia was the most powerful hurricane on record in the Western Hemisphere and made landfall Friday along Mexico’s Pacific Coast as a Category 5 storm. It quickly lost power as it moved inland and appeared to have caused remarkably little damage.