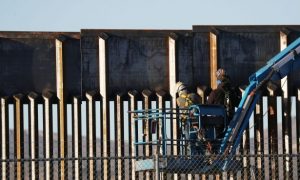 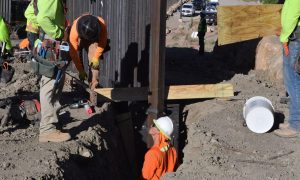 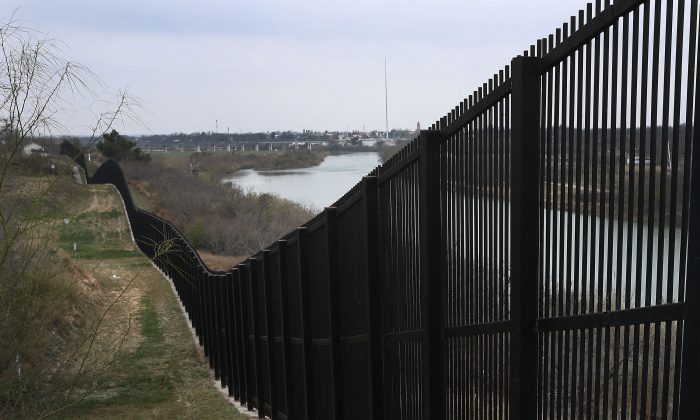 A border fence is seen near the Rio Grande which marks the boundary between Mexico and the United States in Eagle Pass, Tex., on Feb 9, 2019. (Joe Raedle/Getty Images)
Texas

A federal judge ruled on Thursday that a privately-funded U.S.-Mexico border wall construction project in south Texas can proceed.

Southern District of Texas Judge Randy Crane lifted a temporary restraining order that he issued on Dec. 5 after the U.S. government sued to stop the construction project. He also denied a separate request for a restraining order in a separate lawsuit filed by the National Butterfly Center against the builders.

The project seeks to build a border wall in the Rio Grande Valley that would involve about 3 miles of steel posts that would be about 35 feet from the Rio Grande river, which runs along the U.S.-Mexico border in Texas. The steel posts would go on private property, with a concrete road behind them intended for law enforcement.

Fisher Industries, a construction firm based in North Dakota, is funding the project which is estimated to cost about $42 million.

The U.S. government (the U.S. Attorney’s Office for the Southern District of Texas) sued Fisher Industries on behalf of the International Boundary and Water Commission (IBWC) to stop the project. The joint U.S.-Mexican commission said that the wall’s construction “may cause an obstruction or deflection” of the flood and river flows of the Rio Grand River such that it could violate a 1970 treaty between the United States and Mexico (pdf).

The treaty requires that structures cannot disrupt the flow of the rivers, according to the IBWC, which ensures compliance with the international water treaty.

Crane ruled on Thursday that the U.S. government failed to show that the wall’s construction could change the course of Rio Grande and violate the treaty.

The National Butterfly Center (the NBC)—a nonprofit 100-acre wild butterfly habitat located next to the private south Texas construction site—filed a separate lawsuit against the builders. According to The Associated Press (the AP), the butterfly center and environmentalists warned that having a border wall so close to the river could worsen erosion and damage other lands.

Crane on Thursday declined to grant a restraining order that the NBC requested against the project.

The judge ruled that both the U.S. government and the Butterfly Association failed to show the burden of proof required in this case to continue to halt construction, according to Border Report.

The judge said that the plaintiffs failed to show there would be “irreparable injury” if the temporary restraining order was lifted, reported the outlet. “The court finds based on all of that evidence any potential injury to be highly speculative,” Crane added.

Fisher said after the hearing on Thursday that his work crews were ready to start working on Sunday and could install all of the steel posts in a week.

“We look forward to showing the whole entire world that you can have border protection where you need it,” Fisher said, reported the AP.

Fisher said he would “continue to work with the IBWC,” according to Border Report.

“We’re an open book. We want all of America to see what border security can be,” he added. “If I didn’t believe in this so strongly I wouldn’t have taken a $40 million gamble on this.”

He also told the outlet that once the project is complete, he hopes to sell the border wall back to the U.S. government for their use, adding that he aims to sell it for $14 million for the strip, or $16.5 million including 10 years maintenance on the property.

Fisher Industries, Fisher Sand and Gravel Co., and TGR Construction—a wholly-owned subsidiary of Fisher Sand and Gravel Co.—were named in both lawsuits, according to the Monitor. Both lawsuits also listed the site’s property owner, Neuhaus & Sons, as well as the nonprofit fundraising organization, We Build The Wall, and its president, Brian Kolfage, as defendants. However, Kolfage and We Build the Wall were dropped from the U.S. government’s lawsuit earlier on, although they remain named defendants in the NBC suit.

Crane’s Thursday ruling was the second federal ruling in two days in favor of border barriers. On Wednesday, the Fifth U.S. Circuit Court of Appeals lifted a lower court’s stay that had blocked the Trump administration from diverting $3.6 billion from military construction projects to fund 175 miles of border wall.