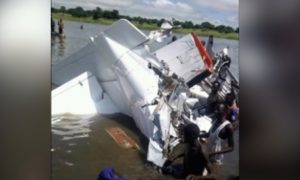 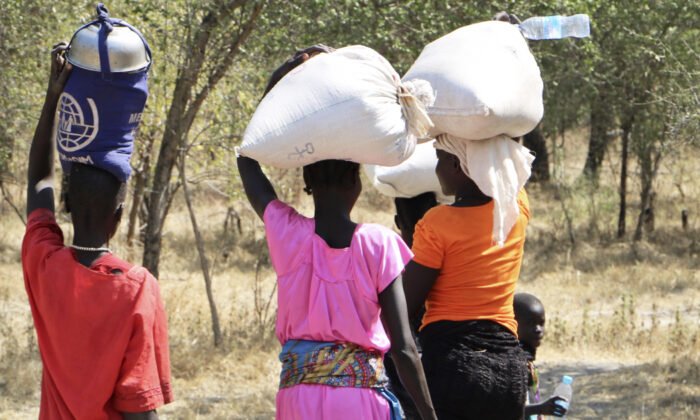 In this Friday, Dec. 7, 2018 file photo, women and girls walk back after getting food in Bentiu, a 38 kilometers (24 miles) journey using a path through the bush, for fear of being attacked on the main road, near Nhialdu in South Sudan on Oct. 7, 2019. (AP Photo/Sam Mednick, File)
Africa

JUBA, South Sudan—South Sudan’s government is failing to provide justice for victims of atrocities that were committed during the country’s five-year civil war, Amnesty International asserted in a new report on Oct. 7.

A lack of political will to hold warring parties accountable for crimes, including rape and torture, has allowed for widespread impunity, according to the report, which is based on 47 interviews with people working in or with the justice sector. It cited a justice system that lacks independence, with prosecutors following orders from above and judges risking being fired if they act against government interests.

“Imagine being witness to the killing of your family, surviving gang rape and, after all that, having your home looted,” Amnesty International regional director Joan Nyanyuki told The Associated Press. If the government is serious about peace, it’s obligated under international law and the peace agreement signed in 2018 to provide avenues for justice, she said.

South Sudan is emerging from a conflict that killed almost 400,000 people and displaced millions. A power-sharing agreement provides for measures including the establishment of a hybrid court, but the government has tried to stall it, the report said.

When investigations do take place, committee members are hand-picked by President Salva Kiir and carried out in secrecy, it said. Reports are often buried and their findings largely ignore crimes committed by the army.

A government-led investigation into sexual assaults in Bentiu in 2018 brought few results as the government denied they had taken place. “Nothing of this kind occurred in Bentiu,” Rabi Emanuel, a government representative, told a meeting in the capital, Juba, early this year.

Legal experts are concerned by the government’s silence.

“I don’t think that (Amnesty) report corresponds with the reality in South Sudan. Each time a perpetrator commits a crime the government always takes measures,” said spokesman Ateny Wek Ateny.

Some officials said the country should prioritize stability before it can move ahead with justice.

But the peace deal is on shaky ground. Next month, opposition leader Riek Machar is expected to return to South Sudan and again serve as Kiir’s deputy, but key issues such as security arrangements haven’t been resolved. Some in the international community fear that fighting could erupt again.

Mental health experts say justice is essential in recovering from the trauma of war.

One new project has started to bring justice to a small number of victims at the local level.

Since 2018, the United Nations, with support from South Sudan’s judiciary, has been holding mobile courts in the towns of Malakal, Bentiu, and Rumbek, trying cases including rape, robbery, and assault.

“Women who have suffered rape and other serious crimes against them are finally getting justice,” said David Shearer, chief of the U.N. mission in South Sudan.

The initiative will be expanded to other areas over time, the U.N. said.

Yet many other victims await their turn.

In the town of Malakal, Regina Nateu hung her head. Three years ago, her brother was shot and killed by soldiers when he left a U.N. protected camp looking for food, she said. The perpetrators have never been found.

Nateu said she is losing hope.

“People in power can’t do anything,” she said. “Only God can do something to those who killed my brother.”