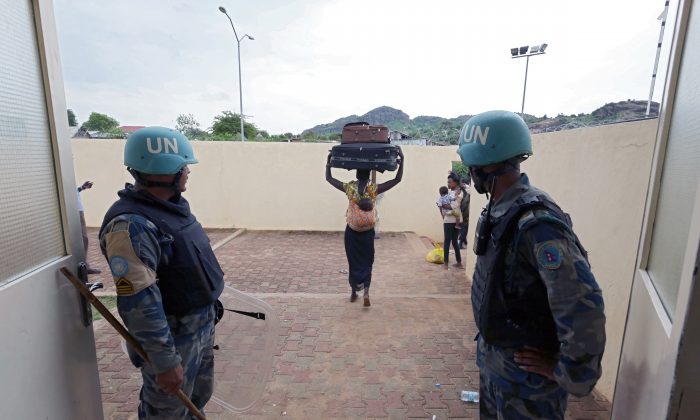 In this photo taken Wednesday, July 13, 2016 and released by the United Nations Mission in South Sudan (UNMISS), villagers are led by UN soldiers to the UN compound in the capital Juba, South Sudan. The death toll from a recent outbreak of fighting in South Sudan is almost certain to climb above the 272 people, including 33 civilians, reported by the government, United Nations officials said Wednesday (Eric Kanalstein/UNMISS via AP)
Africa

JOHANNESBURG—The United States, India and other countries continue to evacuate their citizens from South Sudan, where a fragile cease-fire appears to hold amid fears of a return to civil war.

The U.S. Embassy has said it was arranging flights out of the country for Americans on Thursday.

Other evacuees have already landed in neighboring Kenya and Uganda and elsewhere.

US Sends Marines to South Sudan Capital to Protect Citizens

But South Sudanese trying to flee the country by road have reported being turned back from the border.