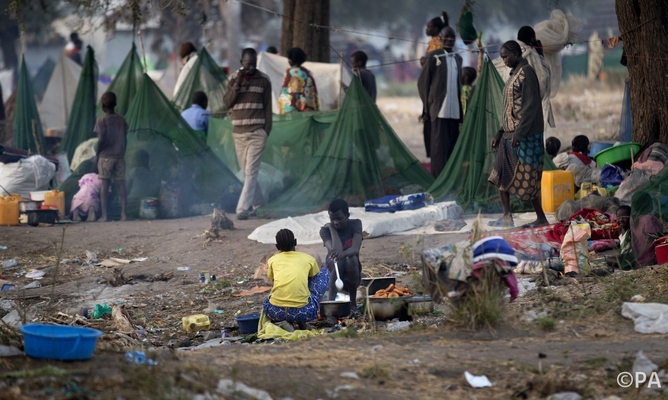 Displaced families prepare food in the morning, some of the thousands who fled the recent fighting between government and rebel forces in Bor by boat across the White Nile, in the town of Awerial, South Sudan Thursday, Jan. 2, 2014. The international Red Cross said Wednesday that the road from Bor to the nearby Awerial area "is lined with thousands of people" waiting for boats so they could cross the Nile River and that the gathering of displaced is "is the largest single identified concentration of displaced people in the country so far". (AP Photo/Ben Curtis)
Africa

Since mid-December the nascent South Sudanese state has collapsed into inter-ethnic violence, sparked by a skirmish within the country’s Presidential Guard. At least 1,000 people have been killed and around 200,000 more displaced.

Regardless of the immediate outcome of tentative ongoing peace talks, the violence underlines the country’s fragility and the difficulties of nation building. Independence – less than three years old – has bequeathed a deeply divided and profoundly impoverished society.

There are other bequests: a political elite inexperienced in peacetime governance and severely limited infrastructure and services of every kind. In the current situation, health systems can only further weaken, increasing the risk of health burden and disease.

Many diseases are analogous with conflict. Displaced people have poorer access to basic services and are exposed to more infections. Conflict also undermines key infrastructure such as hospitals. Risk factors for many infectious diseases – poverty, already poor health, overcrowding, poor hygiene, contaminated food, and lack of safe drinking water – are exacerbated and water-borne diseases such as diarrhoea and cholera become immediate problems.

A Full House of Disease

Neglected Tropical Diseases (NTDs) are a cluster of infectious, parasitic diseases that disproportionately affect the global economic “bottom billion” and are under served with regard to research, treatment and control. South Sudan – after half a century of intermittent conflict and underdevelopment – is unique in suffering from virtually all of the World Health Organisation’s list of NTDs that are endemic to Africa, and in the highest concentrations.

The WHO has officially identified 17 such diseases (although it can be argued that many more fit the broad characteristics of “neglected”). The neglect is especially striking given their importance in driving poverty: limiting health, lives, livelihoods and economies.

Many poorer countries have struggled to build structures to tackle these diseases, with global health priorities favouring diseases such as HIV and malaria.

But right after independence in South Sudan, the Ministry of Health explicitly addressed NTDs. They gathered data on the distribution and prevalence, and participated in effective international partnerships – for instance, a Carter Centre-led project to eradicate Guinea Worm and a transfer of sleeping sickness treatment programmes from NGOs to ministry control.

These are great cost-effective strategies but they require blanket implementation, something that becomes deeply problematic with the sort of crisis we’re witnessing in the country at the moment.

Health Crises Can Be Infectious

Alongside the emergent crisis, a hub of instability has long persisted in bordering regions of northern Uganda, South Sudan and the eastern Democratic Republic of Congo. Renewed violence in South Sudan, as well as in the neighbouring Central African Republic (with the potential for more than a million people displaced between them) will undoubtedly degrade already limited disease control and the capability of the state and international organisations to treat people. A Médecins Sans Frontières team in the country recently told us they had to stop screening for kala-azar due to the conflict (although instead they’ve been able to help people injured in the fighting).

Public health crises can readily emerge in these conditions. But we can’t simply assume that this will happen. In the late 1990s and early 2000s, a sleeping sickness epidemic hit South Sudan. More than 16,000 cases were treated between 1998 and 2005, with many more left untreated. This triggered large-scale, successful interventions by international NGOs and later prompted fear of a resurgence after the government, with more limited capacity, took over. Another worry was that, unlike neighbouring countries with experienced civil servants and established institutional structures, South Sudan had done little to control the tsetse flies which carry the parasite that causes the disease.

Despite seemingly conducive conditions for the disease to spread – a reduction in capacity to screen, treat and control and few initiatives to control the tsetse fly – a major sleeping sickness epidemic seems not yet to have recurred. Just 317 cases were treated in 2012.

In the south-western town of Yei, a separatist stronghold during the previous civil war, a specialised sleeping sickness ward had no patients when we visited in May 2013. A Médecins Sans Frontières mobile screening team tested 60,000 South Sudanese over nine months, and found only 38 cases.

But this seeming ability to control the disease does not mean that will always be the case. The current health system is fragmented, capacity is patchy, communication is difficult and priorities are spread across several diseases. The current political situation may very well be a tipping point towards another sleeping sickness epidemic, or indeed an epidemic of another, or several, NTDs. The issue is simply that we cannot yet know.

What this underscores is that studying disease and how it spreads is complex, and influenced by many environmental and social factors.

In broad terms, there are mutually-reinforcing relationships between poverty and NTDs. But while conflict clearly creates favourable conditions for infectious disease to spread, each particular case will be unique and unpredictable. This makes it even more difficult to tackle.

We don’t know enough to explain why sleeping sickness has not returned with a vengeance in South Sudan, for example, or to predict with confidence whether it will in future. To do this we need information like the distribution of tsetse flies in the country. As thousands are killed and displaced, this kind of work takes a back seat.

Researchers have begun to explore how stigma can prevent people from accessing care, or how various ethnic groups interpret symptoms and seek and access treatment in different ways.

There are grounds for optimism: ongoing international research efforts are yielding simpler and cheaper tools to diagnose sleeping sickness, reducing the burden on overstretched health providers. A new, less toxic and easier to administer drug regimen has also been developed, and has been used in South Sudan since 2010.

The current conflict will undoubtedly set back vital knowledge gathering of all kinds (save for the reporting of a few flak-jacketed foreign correspondents). The fog of war conceals the vital details of many social problems. Hopefully it will be short-lived. But even when the violence stops, there will be many information blind spots that will need to be addressed. It’s unfortunate that just when we need this information most, we’re least able to get hold of it.